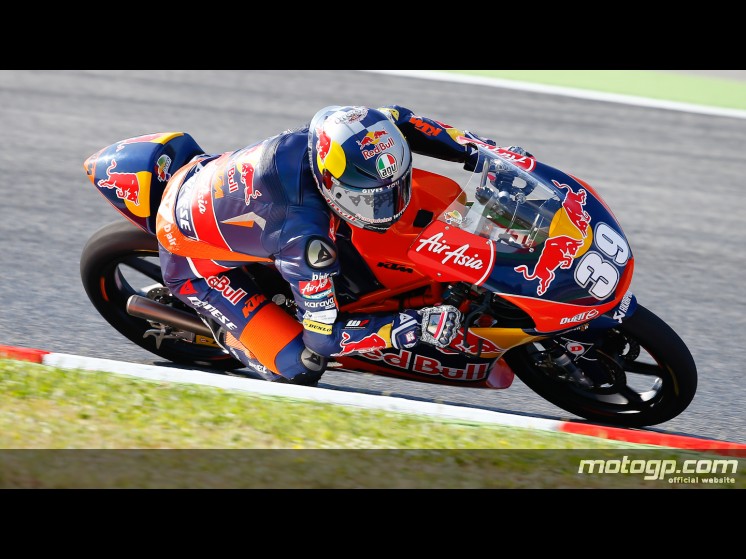 Moto3 championship leader Luis Salom will ride in Moto2 next season it has been confirmed.

Salom who turns 22 on the 7th August has decided that regardless of how the rest of the season goes, it will be his last in the Moto3 World Championship.

Stefan Bradl won the 2011 Moto2 title at just 21, and Marquez the 2012 title at 19, so the Mexicano doesn’t want to spend too much longer in the smallest class of Grand Prix racing.

It was the Spainard’s team manager Marco Rodrigo, who confirmed that Salom will make the step up next season.

“It’s firmly decided that Luis will next year in the Moto2 World Championship,” confirmed Rodrigo.

“Which teams are eligible remains to be seen. Red Bull KTM Team Manager, Aki Ajo has an option on Luis for 2014. He is my first point of contact when he starts a Moto2 team. We have agreed to have a conversation regarding this at the Sachsenring GP.”

However, if Aki Ajo can’t muster the finances to move his team into Moto2, then there is a gentlemans agreement that Salom and Rodrigo can leave and find their own Moto2 team.

Marc VDS are said to be keen in Salom, as is Sito Pons and his HP Tuenti side. Both Marc VDS and Pons are expected to loose Redding and Espargaro respectively, so would both have seats available with their men moving to MotoGP.

There has also been an interest from Jorge Martinez and his Aspar team. Aspar looks to field home grown riders, and may see Salom as a better long term option than Jordi Torres.

Salom’s preference is to stay with Ajo, but all of that depends on if Ajo can fund a step up, if not Salom will be a man in high demand in the intermediate class of Grand Prix racing.