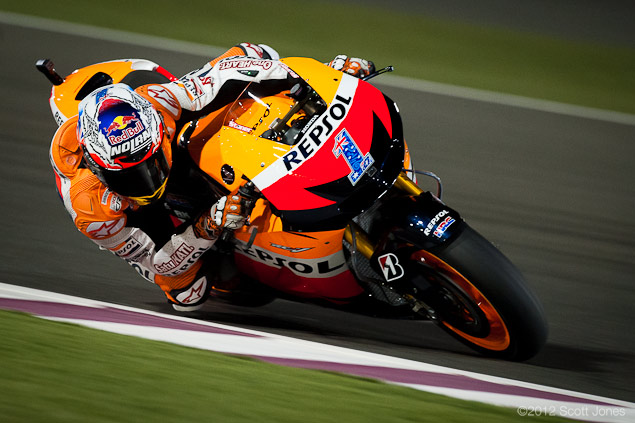 Double MotoGP world champion Casey Stoner has no plans to return to MotoGP, and said he no long has the desire to compete in the sport.

Stoner shocked the world with his retirement last season, and has since been critical over the sport and the series, but was constantly linked with a potential return, either as a wildcard at Motegi or Philip Island. Or even as a full time Ducati rider on one site, but the former champion has made his feelings perfectly clear.

“At this point I can’t ever see myself going back,” Stoner said in an interview with Autosport.

“I’m closed, I’m done with it. I can’t see the championship going in the direction I want it to, where I think I’d enjoy riding the bikes enough again, to want to go back and deal with that.”

Despite lacking the desire to race in MotoGP again, the Aussie did admit to still following the sport, and he stays in touch with some of his old team and friends from the paddock, but doesn’t miss the lifestyle.

“It’s probably been more cemented,” Stoner said when asked if not racing had changed his outlook.

“My mechanics and people are still in the team and I have a lot of respect for some of the riders out there, so I’ll always watch with interest how they’re going, make sure their injuries and things like that are going OK.

“But the fact is I haven’t been dying to watch the races or find out the result straight away.

“I’m watching it as a fan now rather than being there, and it’s not hurting me.”

Although there are still some parts Stoner misses, the negatives far outweighed the positives  and Stoner wouldn’t consider a return unless things changed significantly.

“I miss the bike part of things. I maybe miss the team and the people I worked with, but that’s about it. I miss being able to ride, but I can ride a bike anywhere, I don’t need to go out there and do it.

“Honestly the rest of it was too far out for me to want to, or think about, going back.”