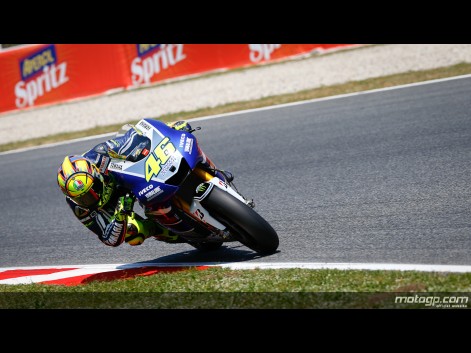 Earlier in the week Valentino Rossi’s legendary crew chief Jeremy Burgess said in one of his most honest and sobering interviews that it would take a “minor miracle” for Rossi to win another MotoGP world title, but the Doctor has laughed off Burgess’ comments.

Speaking in today’s press conference at the Catalunya circuit ahead of the Catalan Grand Prix in Montmelo this weekend, the Doctor was asked about Burgess’ age and title chance comments, and Rossi answer in a trademark Rossi fashion.

“Mine or his?” joked the Italian.

“We must be realistic, to win the world championship will be very difficult, because there are three riders who are very fast, and we have to add Crutchlow.

“I still believe that I can improve, but it is not easy to regain confidence after two difficult years. Working on the details we still have room for improvement, but the title is still far away.”

Rossi was also asked about the chances of repeating the stunning finish of the 2009 Grand Prix, where he famously passed Lorenzo on the last corner of the race.

“If Jorge waits for me, yes! He’s too fast!” said Rossi laughing.

Lorenzo wearing a huge grin himself replied with “I’m sorry I cannot wait! But maybe you are faster than me this weekend…”