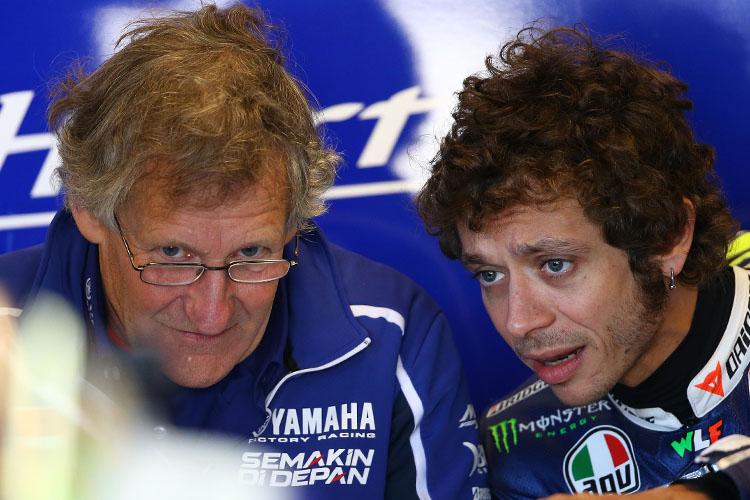 Valentino Rossi’s legendary crew chief has claimed it would take a ‘minor mirace’ for Rossi to win another MotoGP world title.

Burgess who has been with Rossi through all of his seven premier class titles, and was with Doohan, Spencer and Gardener for their world titles, JB has a mammoth 14 world titles to his name, but he now feels his most successful rider may struggle to add to his nine world titles.

“I would say that would be a wonderful dream – perhaps a minor miracle,” Burgess said in an interview with Spanish paper Marca.

“While at Ducati, Vale told me that he was perhaps no longer at the level of Lorenzo or Stoner, but certainly not at that of only sixth or seventh place either. We’ve now got people like Marquez arriving.

“Vale has had a lot of success. He will be competitive at various circuits, but only time will tell whether he is able to pick up the title. You have to accept the passing of time.”

When asked if he thought the bike was the reason for the Burgess was defensive of Yamaha.

“It can not be the Yamaha because Jorge is going well. We know that Honda is very good. But for many years, the Yamaha was stronger.”

When asked about data sharing within the Yamaha team, Burgess said: “The information is there for all. But the data changes a lot from one day to another. And Valentino weighs 75 kilos, Jorge 70, there are so many differences. We’re constantly looking at data from Jorge or Crutchlow.”

Maybe it’s a sign of how much the former champion that he is admitting to studying the data of Lorenzo and Crutchlow in a move which would’ve seemed ludicrous back in 2008.

Burgess went on to talk a little bit more about his personal experiences alongside the Doctor.

“It is normal,” when asked about the move to Ducati with Rossi. “I have spoken with Jorge’s mechanics and also they would go with him to other teams. It was very easy to follow Vale to Ducati, not so much when it was from Honda to Yamaha, because it had been 21 years in HRC.”

He also revealed that Rossi moved to Ducati due to pressure, and knowing Lorenzo would be the new number one. Burgess also admitted he and Rossi expected more from the Ducati experiment.

The whole article including some quotes on Stoner and Marquez can be found here.