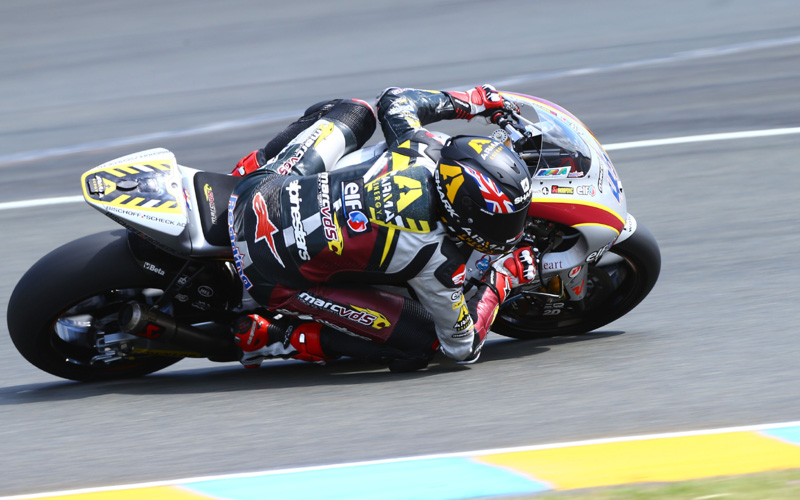 Marc VDS team boss Michael Bartholemy is considering a move to MotoGP in 2014 in an effort to keep hold of Moto2 star Scott Redding.

But just what could the Marc VDS bikes have underneath them? Ducati? Honda? Yamaha?

This past weekend saw Redding storm to his second Moto2 victory in as many races, but it also saw some movement from the Marc VDS bosses.

Maybe it was a hint that Pramac dont have a long term future with Ducati, and Marc VDS could be set to take over the satellite Ducatis. Negations were in place for this move to happen last year, but negations fell apart, and the move failed to materialise.

Scott Redding has also tested a Ducati Desmosedici. Last year the young Brit had a test day on the GP12 at Mugello and whilst no lap times were posted, Ducati bosses were impressed.

A move from Marc VDS to MotoGP with Ducati could see them keep hold of their talisman in 2014.

When asked about the possibilites team boss Michael Bartholemy didn’t rule out the prospect of having a Desmosedici or two in the Marc VDS garage for 2014. “You can exclude nothing,” said Bartholemy.

“Our common goal is to obtain the best possible machinery for 2014 and Scott Redding. A customer Ducati would be a possibility, because we’re trying to find a working machine first.

“Then we look at what could be done with the Production Racer from Honda.

“We have already talked with Kalex about the possibility of a motorcycle with a leased Yamaha M1 engine. That would not be a bad solution.

“We keep eyes and ears open and see what arises in the next two weeks.”

A move to MotoGP probably wouldn’t be a step too far for Marc VDS, with nearly, if not all team members having some experience in MotoGP, including Redding’s crew chief Pete Benson who helping guide Nicky Hayden to the MotoGP crown back in 2006.