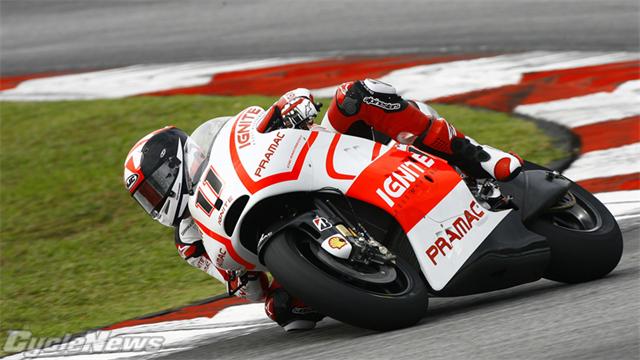 Ben Spies may not start another MotoGP race until late July when the MotoGP paddock reaches Laguna Seca.

The Ignite Pramac rider pulled out of the Italian Grand Prix, after just two practice sessions, making it three races he has now missed due to a shoulder injury sustained in Malaysia last year.

“Riding the bike is not the easiest thing right now but it is to be expected, so we need to decide on what to do and how to approach the weekend and what to do next,” said the Texan.

“I have seen a huge improvement in my shoulder for doing everyday things, even in the gym, but there is no getting around it on the bike it is a completely different story. I am feeling things that I had no idea were a problem again. It is not easy, it is a struggle right now so we need to figure out the best plan of action.

“It is more the weakness and instability of it rather than pain, although there is some pain.

“Obviously I thought I was ahead of that and feeling good, doing the normal workouts but when I get back on the bike I’ve realised I am not 100% and it shows out there. I can feel it.

“I almost had a big crash this (Friday) morning because I couldn’t control everything. I’m not happy about things, so I need to talk with everybody and see what the smartest thing is to do. The change of direction is the worst.

“The straight line braking is much better here compared to Austin but the left to right move while controlling the throttle and getting back to the brake after that is where I am struggling. Through the third and fourth gear chicanes is where I am definitely struggling.”

But there were some people in the paddock saying that we may now not see the Texan again until his home round in Laguna Seca. Spies will see how the shoulder is in Montmelo in two weeks time, and may ride just the practice sessions again, and the post race test on the Monday. But if Spies was to sit out till Laguna, the 2009 World Superbike champion would also miss the Assen and German rounds.