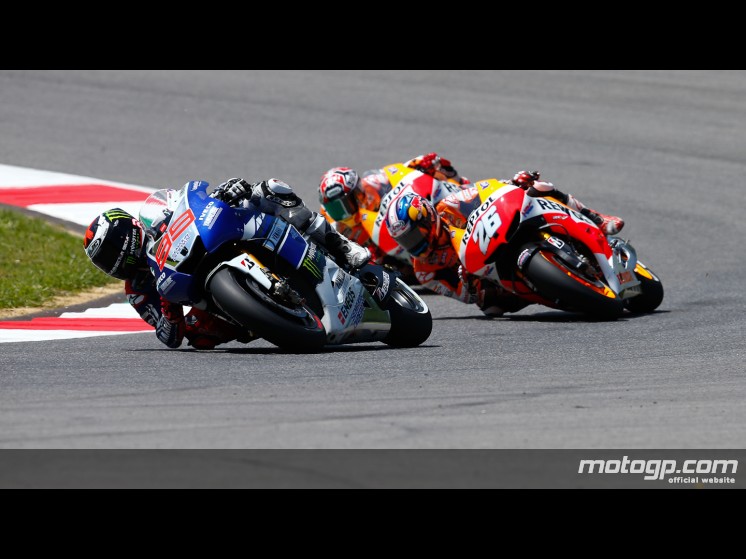 Jorge Lorenzo stormed to victory at the Italian Grand Prix at Mugello to close the gap on Dani Pedrosa at the top of the MotoGP world championship.

Over 76,000 fans were packed into the picturesque Mugello circuit, with the large majority there to see Valentino Rossi, but it was his teammate who stole the limelight with a text book ride in the Tuscan hills.

Current championship leader Dani Pedrosa finished in second position, with Cal Crutchlow claiming his second podium in as many races, as Marc Marquez and Valentino Rossi crashed out.

Dani Pedrosa stole the pole from Lorenzo yesterday afternoon, and got off the line quickest, but ran slightly deep into the San Donato corner, and left just enough time for Lorenzo so muscle his way into the lead.

But the main action of the first race was at turn 3, the Luco and Poggio Secco corners, when Alvaro Bautista had a coming together with home hero Valentino Rossi. Bautista had taken a sweeping line into the Luco corner, and Rossi went round the outside, when Bautista hooked it back he found a M1 in the way and both riders ended up smashing into the air fence.

However back at the front Lorenzo, Pedrosa and Marc Marquez broke away from fourth placed man Cal Crutchlow, with Stefan Bradl battling with the two factory Ducati’s behind the Brit.

As the race reached its halfway through the race, Lorenzo applied the martillo, and turned the speed up, just at the time Pedrosa was facing troubles with his rear tyre, and the world champion very quickly began distancing the Honda riders.

Lorenzo continued to pump in remarkably quick laps with his trademark consistency  and would eventually run out winner with a comfortable 5.4 second margin.

“The conditions and the circumstances were good for us and I didn’t make a mistake, I made my best performance even if the conditions were much hotter than this morning,” said Lorenzo.

“We are still struggling so much when the conditions get hotter. Anyway the key of the race was in the middle where I improved my riding, I was able to brake later with less fuel in the tank so I was able to improve the lap time by two tenths, from this moment Dani gave up a little pace and I could get away and win the race, more or less like last year.

“It’s very special; I won the last three years here so this track is magic for me and very positive for Yamaha. It also reminds us to keep working on the bike as at the tracks which are not so flowing like Mugello we will struggle.

“I’m very happy to give this win to Yamaha Motor Racing President Shigeto Kitagawa because this was his last race here in Grand Prix, as he will retire. He has done a great job for the team in the last years and it is a big loss for us. I hope he will enjoy the different life he will have. Our president Yanagi-san is also lucky for me, I won the 2010 Championship in Malaysia when he was there on the track and again today a victory with his presence.”

With Lorenzo clearing off into the distance, Pedrosa and Marquez were left to battle it out for the remaining podium positions. With Pedrosa appearing to be struggling with his rear tyre, the rookie began pressuring his team mate, and with just five laps to go Marquez passed his team mate at Casanova Savelli corners, and he looked set to ride off with a comfortable second place after a tough weekend.

But with three laps remaining he lost the front end of his Honda RC213V at the Palagio corner to throw away his podium record, and his chance of beating Biaggi’s record of a podium in all five of his first ever MotoGP races. Marquez knew he had made a mistake and was visibly angry with himself to leave the battered and bruised rookie heading home without any points.

With Marquez crashing out, Pedrosa inherited the second spot and Cal Crutchlow who was inching closer to Pedorsa in fourth, was gifted the third position to allow the Brit to claim his second podium in as many weeks, and create a little bit of history in doing so, by becoming the first Brit to claim back to back podiums in the top class since Rocket Ron Haslam over 20 years ago.

Stefan Bradl claimed his best position of the season by a country mile, taking the chequered flag in fourth, but he was made to work for it by the two factory Ducati’s of Andrea Dovizioso and Nicky Hayden right up until the last lap of the race. The Ducati’s would continue their gradual improvement and end up finishing in fifth and sixth respectively.

Ducati’s test rider Michele Pirro finished in seventh place aboard the Ducati lab bike, and just ahead of the top CRT rider Aleix Espargaro, who is making a habit of joining the winners in parc ferme as top CRT.

The badly injured Bradley Smith, who will go to San Marino for a skin graft on his little finger tomorrow, battled his way to a heroic ninth position, and Spanish CRT rider Hector Barbera closed out the top ten.