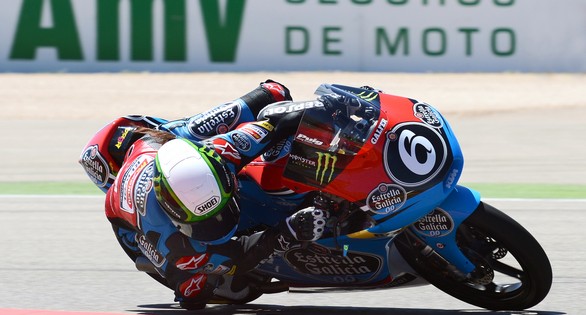 Maria Herrea made history yesterday when she became the first female rider to win a Spanish Championship race when she claimed the top step of the podium at Motorland Aragaon.

16 year old Herrea, who doesn’t turn 17 until August rides for the Junior Estrella Galicia 0,0 team, which is run by successful mentor Emilio Alzamora.

Herrea is in her second season of CEV Moto3 championship racing, and has been dubbed to make her Grand Prix debut this season with a wildcard appearance or two, possibly at Aragon or Valencia.

Having qualified in third position on the front row on her KTM, she managed to get to the front, and pipped Jorge Navarro over the line by a mere 0.085s, and Alejandro Medina by more than four tenths of a second.

Herrera trains, and is mentored by current MotoGP star Alvaro Bautista, and he has tipped her for great things, and she is already making quite an impression in the GP paddock, with congratulatory messages from current MotoGP world champions Jorge Lorenzo, Moto3 title leader Maverick Vinales, Alex Rins and Alvaro Bautista.

Congrats to @MariiaHerrera_6 , she is great! Her victory today in the Spanish Championship shows that more women are needed in all sports.