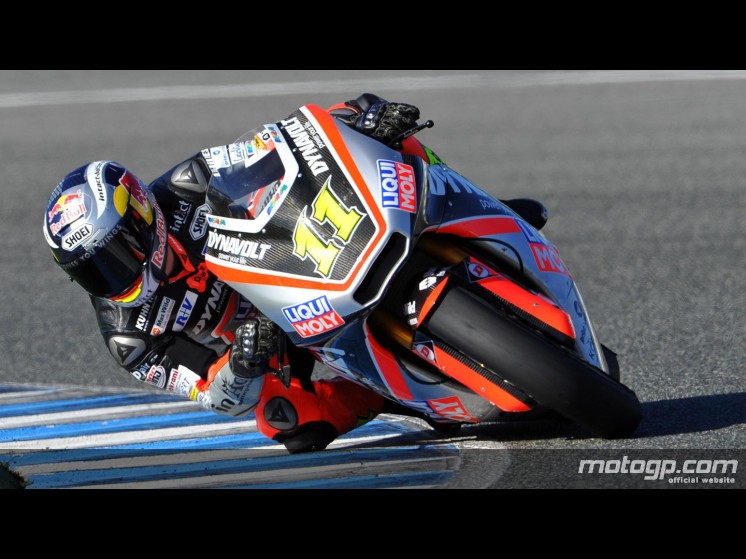 2012 will be a year that Sandro Cortese will never forget. The young German claimed the Moto3 world title with a supreme display of consistency and maturity that his rivals couldn’t live with.

Moving into 2013 the young German has stepped up to the ultra competitive Moto2 class, and with his private Intact GP team, Cortese will be hoping he can follow in the footsteps of fellow German Stefan Bradl and claim the Moto2 title.

GPxtra was lucky enough to speak to Cortese after the opening two rounds, and here’s what Sandro had to say.

Firstly how are you feeling after the start in the season?

Fantastic! I was glad when the new season went off. Although I had to recognise that Moto2 isn’t comparable with Moto3.

What are the biggest difference between a Moto2 and a Moto3 bike?

How much more physical is a Moto2 bike? Have you had to change your training for the step up?

Yes  the physique plays an even greater role. I need more power to act the bike. But I have worked hard over the winter break and I trained (and added) three kilos of muscle mass.

I want to talk about last year; I know it must be hard, but can you put into words what it meant to you?

First motorcycle world champion of the Moto3 – it was a long way.

Last season you also showed you could win, and win consistently, do you think your win in Brno the year before was a good psychological barrier to break?

Definitely! The victory in Brno was my breakthrough.

You seem very close to Aki Ajo – did that help you last year?

I have learned a lot from him. But everyone has to drive themself.

A lot of riders struggled after moving from the two stroke 125s to the four stroke 600’s, do you think your season a 4 stroke has helped ahead of this year?

My experience will benefit me. Yet the Moto2 is quite different than the Moto3. The Moto2 is as hard-fought as ever.

And Finally, what are you hoping to have achieved by the end of this season?

It’s hard to say because as Rookie it’s all new to me. I must acclimatize myself and if I could put a few highlights would be great. Sooner or later I will be back at the top.