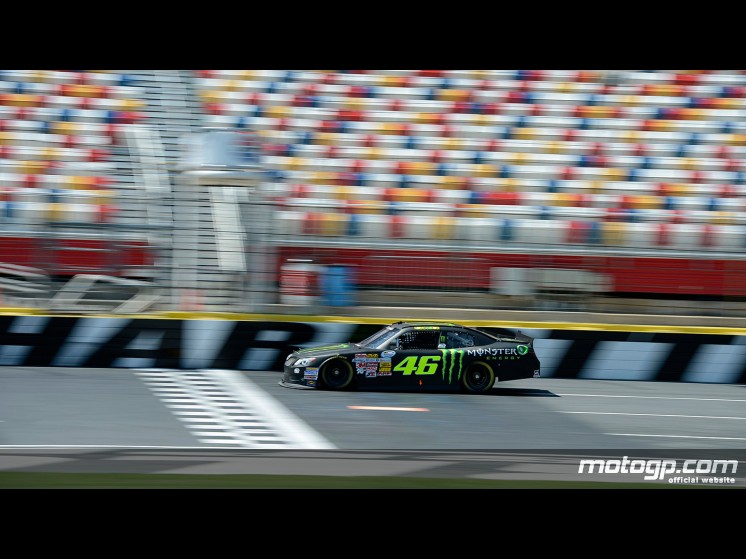 The nine times world champion, who finished sixth in Texas, where he met Busch, the most successful NASCAR driver in history, and the Doctor was fast enough to lap in the top half of the NASCAR field.

Charlotte is one of the fastest and most respected tracks on the NASCAR circuit, and Rossi was here to take this test seriously. Once he got the car up to speed, he managed to lap around the  185mph mark. And once the Doctor got comfortable, the lap times dropped dramatically.

“It was so cool to understand the feeling!” Said Rossi.
“I have a lot of friends from Europe and Italy who follow NASCAR. It looks like it’s a completely different type of racing than what we do in Europe and I expected something more like this –exciting, high speed and a great feeling in the corner. In the bank you have a lot of grip, so you are glued on the racetrack. It was great, I enjoyed it a lot. I love driving the race car, and I always have, so it was exciting to drive a NASCAR.”
“At the beginning it was a bit strange because it’s difficult to go straight. But after some laps, I had a lot of confidence and I was able to go faster and faster and faster. I must say I got along very well with Kyle. He’s a good guy. I like him and he gave me a lot of important advice.”
Kyle Busch has plenty of pedigree to comment on NASCAR drivers, and he was impressed with the Doctor’s skill behind the wheel.
“I thought it was a really cool experience and it also helps when you have two guys who are enthusiastic about their sport and have a good mantra about it,” said Busch.
“I think Rossi is a really cool dude. We were just having fun, hanging out together. To me, I thought the experience was awesome. It’s cool Monster Energy brought us together, it was a lot of fun. Just getting the feeling of asking him about his sport and him asking me about NASCAR a little bit. Just having the dialogue there was good.”
“And as far as driving the car, I thought he did pretty good. He started out a little slow, which is fine, but every lap he picked it up a lot. He got to where he was running some competitive lap speeds – times that would put him in the top-15 in Nationwide Series practice. That’s pretty good for a guy in his first start, who is just coming over and getting used to things and someone that is used to driving on two wheels.”