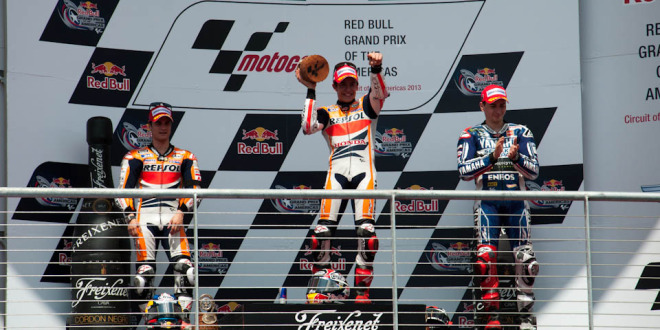 Marc Marquez has today created history in becoming the youngest ever rider to win a MotoGP race aged just 20 years and 63 days old at the Circuit of the Americas in Texas.

The Repsol Honda rookie beat Freddie Spencer’s 31 year record as he rode masterfully from start to finish and win the inaugural Texas GP.

Marquez stalked Pedrosa for almost twelve laps, before taking the lead just beyond the half way point of the race, and then break his team mate, building an unbridgeable gap to his vastly experienced compatriot. Despite Marquez leaving Pedrosa it was still enough to give Repsol Honda 1-2 with Jorge Lorenzo taking the third spot on the podium.

“Already third place in Qatar was a dream, and now victory in my second race is even better! I am very grateful to the team for their efforts over the pre-season; we have worked very hard and, without this, the victory would not have been possible. The race was very intense and physical.

“I followed Dani for many laps and then decided to launch an attack and try to open a gap with ten laps to go. I could not pull the gap I wanted as some problems with the front emerged that we hadn’t experienced throughout the weekend. Despite all this, we were able to take the victory.

“The 25 points are important, but what is more important is to have achieved a win in my second race in MotoGP. We realise that more difficult circuits lie ahead for us, but we will try to give 100% at all of them. Our battle is not the one for the championship, but rather taking it race-by-race and enjoying every moment,” said an estatic Marquez.

Marquez (who gambled with a harder tyre) went into the first corner third behind Honda duo Marc Marquez and Stefan Bradl, but he took back the second spot from Bradl and put Pedrosa in his sights. Jorge Lorenzo didn’t want Marquez to get away, and he put in a hard pass on Bradl to grab third, a third position that he would stay in till the chequered flag.

Monster Tech 3 satellite rider Cal Crutchlow took a highly impressive fourth place, finishing ahead of Stefan Bradl and Yamaha Factory rider Valentino Rossi, both of whom had tested at COTA before. Despite finishing fourth he didn’t make it easy for himself as he ran off track and found himself behind Bradl, Alvaro Bautista and Valentino Rossi and having to pass all of them to reclaim his final position.

After a horrible weekend Valentino Rossi finished in sixth finding himself battling with the satellite Honda of Alvaro Bautista and a man on a horrible red bike called Andrea Dovizio. Despite initally struggling, the Doctor managed to drop both Bautista and Dovi, and finish a whole 16 seconds behind Marquez.

Bautista and Dovizioso had a battle royale to the finish line and the Ducati rider prevailed and he finished in 7th, while Nicky Hayden finished in ninth, and as top American, just ahead of Pramac Ducati’s Andrea Iannone who closed out the top ten.

Aleix Espargaro rode to a lonely 11th, but once again managed to beat the prototype machines of Bradley Smith and a unfit Ben Spies.

Colin Edwards had to pull out of his first Texas GP with a mechanical failure.