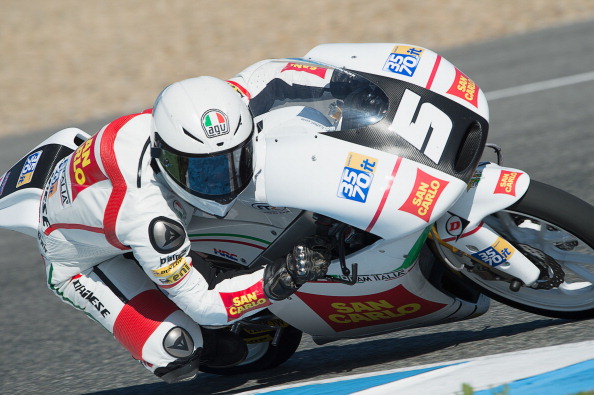 Last year a relatively unknown 16 year old Italian burst onto the world scene with a stunning second place in Qatar, and then backed that up with a sensational victory in extremely difficult conditions in Jerez to take a superb championship lead.

That man was Romano Fenati.

Fenati continued his good form throughout his debut season in Moto3, and went on to claim a further to podiums in both his home rounds of Mugello and Misano.

Finishing the season in sixth place, and just missing out on the rookie of the year award shows a remarkable start into world championship racing for the young Italian who is destined for huge things.

Now a year older and wiser, Fenati is hoping that 2013 will be the year that he can really progress.

GPxtra caught up with him after the Jerez test to see just how he feels about 2o13.

– How was last season for you? Surely you didn’t expect to be leading the championship after two rounds?

Last season, for me, has been very positive. No, I did not expect, after only two races to be 1st in the Championship. However, 6th place in the final standings was great.

– And are you happy with how 2012 went in general for you, or would you like to have had a few more wins?

I wanted to win all the races (he says laughing) but as I said 2012 was a year where I made valuable experience and achieved a good result.

Of course Jerez and then also the Mugello where I got the second place and where there were so many of my fans.

– With all the 2013 testing now completed, how are you finding your new bike?

I just finished the test early as next week and are leaving for Qatar, with my bike I feel good even though you can always improve.

– Obviously last year was the first in Moto3, and now all the bikes are evolving, what’s changed on your bike for this year?

My bike has changed but not much …. Let’s hope so.

– Testing looks like it will be hard to beat the KTM’s this year, are you confident you can do it?

The KTM is undoubtedly a great bike as well, as the riders are all very competitive. I can not be sure of beating the KTM but I’m sure I put all my effort.

– Many have said you’re the leading light in a new breed of Italian racers coming through, what would you say to that?

I hope so, but there are also other very good Italians.

– What are your targets for this year? Do you think you can challenge for the title?

I hope to repeat the success of last year and even better.