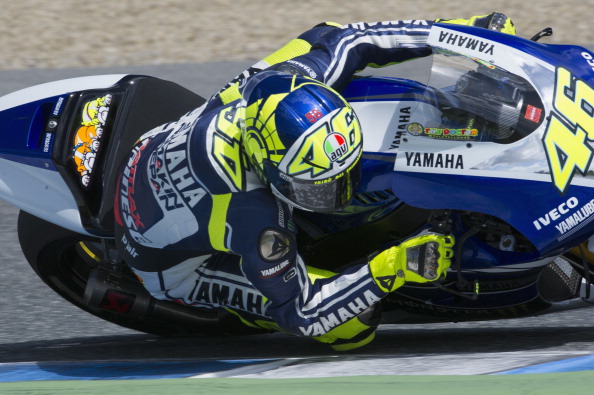 Valentino Rossi is back to the top of the timing screens after posting the fastest lap on the second day of the final pre season test in Jerez de la Frotnera.

The Doctor who back on his Yamaha M1 for the 2013 season has been on the receiving end of bad luck through pre season testing with lots of issues with his bike, but today on a brighter Jerez circuit it all came together for the nine times world champion.

Most of the MotoGP riders decided to wait (and watch the Formula 1 race) for the afternoon session before venturing onto the track, after it began to dry out thanks to some wind and sunshine.

Valentino Rossi was the fastest rider on the day, and waited till around 15:30 to post the fastest lap of the day, a 1’39.525, and in doing so bettered Jorge Lorenzo’s 2012 pole lap record, and became the first rider to break the 1’40 barrier. The Doctor appeared to be back to his former self with the new Yamaha frame which had been bought to Jerez after Honda domination in COTA.

“Today’s test session was very positive for us,” said Rossi. “I’m so happy, especially because we used a different style of setting. It is very important for us to understand this setting, which can help and effect my riding style to ride the bike in a better way and stay more constant, especially with good lap times on old tyres.

“To make the first position with a time of 39.5 is good and also being as fast as Jorge. Me and my team are very happy with the pace and I think we will try to continue to work on this way.”

Second place belonged to yesterdays fastest man, and Rossi’s team mate Jorge Lorenzo. The reining World Champion was just 0.015 seconds behind his team mate to suggest the new parts that Yamaha have bought to the test are certainly an improvement than the initial ones they tested through Sepang and COTA.

Lorenzo was again the master of the long run and pumped out fast lap after lap and continues to send ominous signs to his rivals.

“The track was dry but not in perfect conditions today, there was not so much grip and we had some problems in some corners, where the bike was not very stable,” said Lorenzo.

“In general it was a very positive test. We worked on suspension and electronics today and we saw that compared to Austin the Yamaha’s were much more competitive. There are three Yamaha’s in the top three and that is good for the motivation of the brand.

“The track is not in the best condition, it’s dry but it’s not perfect because of the rain. I think we have to focus on getting more stability on acceleration and get more comfortable with the race pace.”

Making it a hypothetical Yamaha lock out was satellite rider Cal Crutchlow taking third position. The Brit was just 0.049 seconds behind Rossi, and who lamented that he basically has only has the 2012 version of the M1 with no updates.

“I am very happy with how today went and it was good to get in some laps in the dry,” said Crutchlow.

“We had a few things to try with the bike and the weather meant we could assess what was positive and negative. It wasn’t easy at the start because the track was really dirty and then later on it got quite cold and slippery, but we got some important work completed on the set-up.

“My Monster Yamaha Tech 3 Team did a great job and I am sure with some small adjustments tomorrow we can be faster. The pleasing aspect of today was I was very consistent and that makes me confident for when we come back for the race here.

“The fact that the top three was filled by Yamaha also bodes well for the race in a few weeks. I am right in the mix with the factory bikes again and this is very satisfying for me.”

Despite seeming Honda dominance from the first three tests, Honda initially struggled in Jerez, and fourth fastest was Dani Pedrosa. The title favourite was just a tenth of second off Rossi’s lap time, and posted it just before rain hit Jerez around 4pm and effectively ended the days testing.

“Today we were lucky enough to be able to complete some dry laps which was important, even though the track was quite dirty,” said Pedrosa.

“We reconfirmed some things from the other tests here at a different track, nothing really new. Unfortunately we were not able to complete the whole programme before the rain came again but happy that we did some laps.

“Let’s hope tomorrow stays dry so we can continue our programme and finish in the best way before Qatar.”

Surprise of the day was to see Andrea Dovizioso in fifth on a dry circuit. The Ducati was just under eight tenths of a second behind Rossi.

Ducati are using the Jerez test as a real opportunity to test new parts, and all five riders were lapping on different bikes. One had a different tank layout and one with a different weight distribution and has shark gills. Dovi also had a new screen to test, whilst test rider Michele Pirro continued with his two ‘laboratory’ Desmosedici’s.

“Looking at the result, you could certainly say the gap of seven tenths isn’t bad, but you can’t really refer to the times because it will probably be dry tomorrow and the track will be faster. Today we did a number of tests with the setup, and I’m curious to see what we can do tomorrow. Anyway, there are a number of aspects we have to work on because we’re still behind,” said the Italian.

Alvaro Bautista was the second Honda and ended up sixth before suffering a crash at the Pons corner that caused the session to be red flagged. Bautista suffered two micro fractures to the metacarpals his third and fourth fingers of his left hand.

Marc Marquez was surprisngly low and ended the day in seventh position. The rookie had said he was struggling to get used to the circuit on a MotoGP machine, but it didn’t stop him from scrapping his elbow along the asphalt at every opportunity he got. Marquez was 1.2 seconds behind Rossi, and will be hoping for a dry day tomorrow.

“We managed 36 laps and improved quite a lot from the beginning to the end but we can still improve a lot further. At first I found myself riding the Moto2 lines but gradually I learnt and began taking different lines which suit the MotoGP machine better,” said Marquez.

“We worked on the rear grip and struggled to improve, maybe we spent too much time in this area. However, we fixed some problems and now we have some new issues to deal with that we must work on tomorrow.”

Stefan Bradl was eighth and he also suffered his second crash in two days. The German was only a tenth behind his former Moto2 rival abord his HRC backed LCR machine.

Pramac’s Andrea Iannone was ninth and the second Ducati ahead of Ducati factory rider Nicky Hayden, who closed out the top ten, and was an alarming 1.1 seconds slower than his team mate Dovizioso, despite recovering from minor wrist surgery.

Top CRT rider of the day was Hector Barbera on his Avintia FTR Kawasaki, and he ended the day in 11th and just 0.050s slower than Hayden and 0.022s faster than MotoGP rookie Bradley Smith.