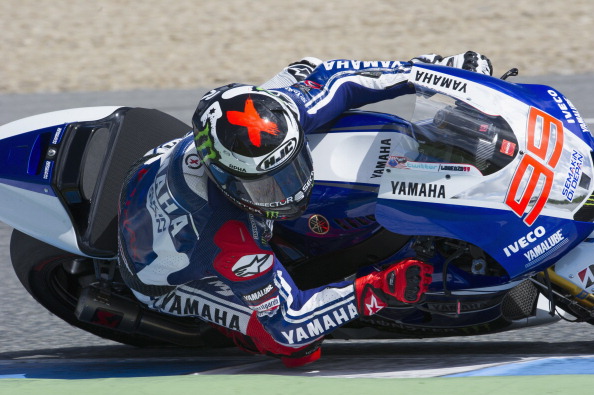 Reining world champion Jorge Lorenzo was the fastest rider on the opening day of the final IRTA test in a soggy Jerez de la Frontera.

Rain has been  a reoccurring theme of the pre season testing ahead of the 2013 season, and Jerez was no exception to this theme.

With the morning session a nigh on wash out, it wasn’t until the afternoon that the riders decided to venture out onto the track.

The fastest rider of the day was two time MotoGP and reining world champion Jorge Lorenzo.

The world champion has worked massively, and now is somewhat of a rain specialist was the fastest rider and posted his fastest time right after the lunch break. His unrivaled lap time was a 1′47.423.

Immediately behind the world champion was the Repsol Honda duo of Dani Pedrosa and Marc Marquez. Despite behind second and third respectively the Spanish pair were over a second behind their compatriot, and Pedrosa just 0.050 seconds behind his vastly experienced team mate. There was also some complaints from Pedrosa of the chatter which hampered the RC213V at the start of last season.

Surprisingly (or unsurprisingly as the case may be in the wet) the Ducati’s were competitive at up the sharp end, but it was Pramac’s Andrea Iannone who was the fastest of the five Ducati’s present in Jerez.

Iannone posted a 1’48.984 second lap, which was just over a second and a half slower than Lorenzo’s time, and was faster than Ducati’s test rider Michele Pirro who was fifth (and will be wild carding in the Jerez race in May) with Nicky Hayden and Andrea Dovizioso 7th and 10th respectively.

Valentino Rossi continued to get acquainted with his M1, although he faces advsirty with technical problems contuing to hamper his efforts as he ended the day sixth fastest. Both Rossi and Lorenzo riders received new frames to test, but they will wait till tomorrow to use them.

Sandwiched inbetween the factory Ducati riders were Yamaha and Honda satellite riders Cal Crutchlow and Stefan Bradl who were seventh and eighth respectively.

Faster CRT rider was Yonny Hernández who was on his new Green, Gold and White PBM ART, although the Colombian used two sets of his four rain tyres today.