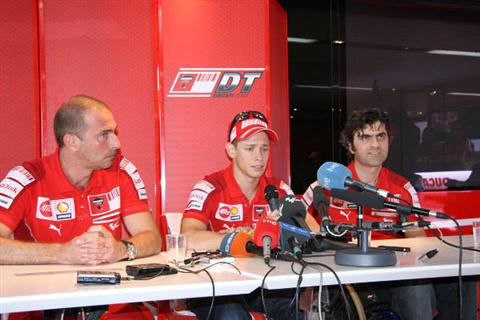 Filippo Preziosi resigned from his position at Ducati last month, many think he jumped before he was pushed, and with health reasons being cited who were we to question the news?

Since his departure fans and riders alike seen attribute most of Ducati’s failings down to the Italian, but there is one man who is standing up for him, and it is arguably the last person who you’d expect to, Casey Stoner.

The Aussie who of course so famously rode for the Bologna brand for four years, and gave them their first MotoGP title back in 2007, was not happy with the decision to reliveve Prezioso of his roles, and voiced his displeasure during this past weekends Melbourne F1 round of which he was a guest of the Red Bull team.

“Ducati made ​​a series of errors. With the budget that was used during the Rossi period, I think we could have won a lot more and, above all have kept winning.

“They thought, ‘We achieved these results with Stoner, then it will get better with Valentino,’ there was a time when they didn’t have so much passion.

“Removing Preziosi was a bad choice: he is a fantastic engineer and created the project from scratch, a winning project with so much untapped potential. When I went to Honda I brought me the whole crew with me because I knew we could win again and if I could have, I would have taken him with me.”

Quite high praise from a man who was largely critical of his time with Ducati, and only time will tell wether the decision to replace Preziosi was the right one or not.