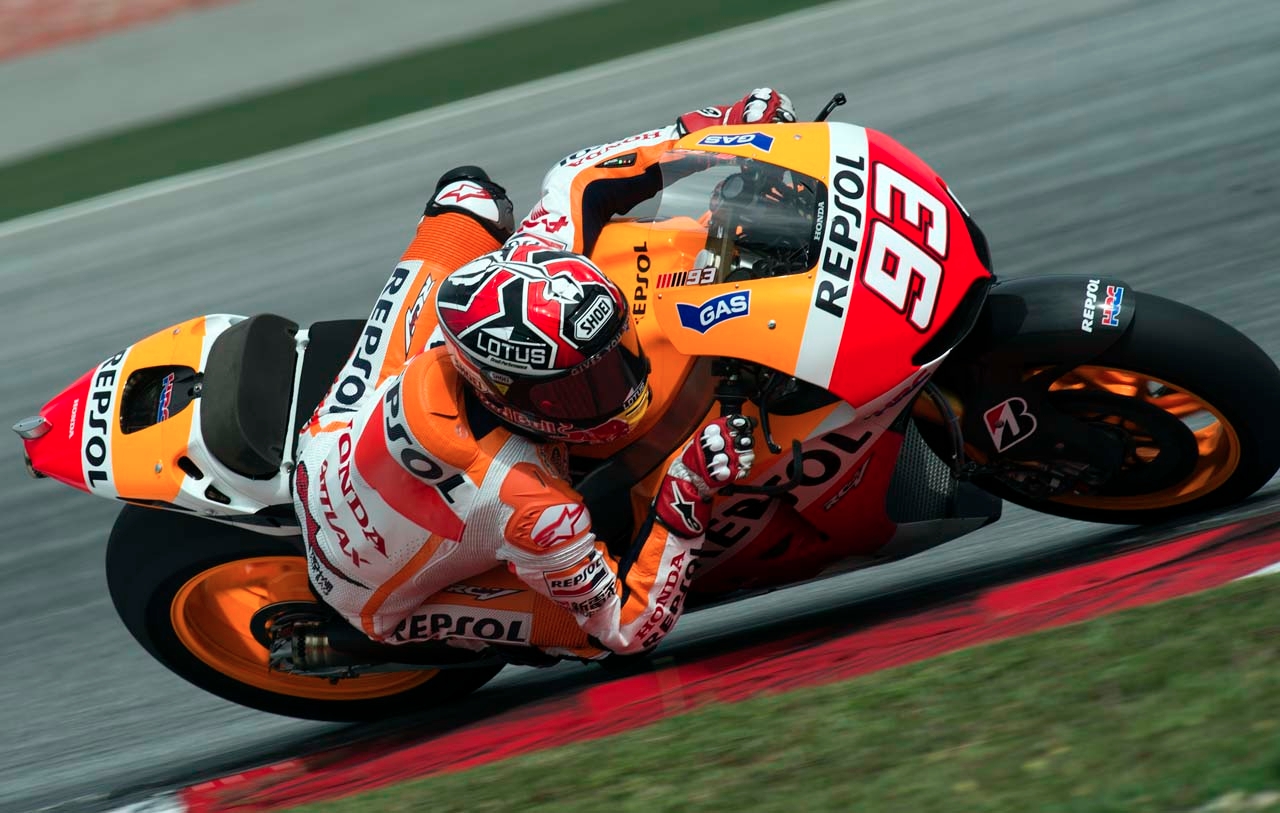 Dani Pedrosa has today posted the fastest lap in Sepang during the first day of the 2013 pre season testing ahead of world Champion Jorge Lorenzo.

Pedrosa’s time was a 2’01″157, with the world champion less than a hundredth behind after a whole day of testing in the Malaysian heat.

Pedrosa seemed happy with his test times, and glad to be back on his bike. The 2012 runner up said, “It’s the first day back testing after the winter break. We’ve spent three months off the bike and the feeling from the first day testing is positive. The track was in good condition and we were able to put in a lot of laps at a good pace, thanks to it not being especially hot.

“I haven’t ridden since the November test in Valencia, so today has been a first step to getting back on the pace. We didn’t play about with the setup today, but we will move onto that in the remaining two days of testing.”

MotoGP rookie Marc Marquez was a sensational third at the end of the day, with 9 times world champion Valentino Rossi ending the day fourth after returning to his Yamaha M1.

Marquez was in action late November at the Sepang International Circuit testing the RC213V, but didn’t even manage 100 laps making the testing times from today shocking for some, and left others sitting smugly after tipping the Spaniard to ruffle a few feathers in 2013.

Marquez had a heir of the man he is replacing at the Repsol Honda as he shot out of his garage, and didn’t waste any time firing himself to the top of the timing sheets before his more experienced rivals put themselves about Marc. Despite that the rookie ended just 0.044 seconds behind his vastly experienced team mate.

Marquez was a little shocked with the pace he was running at after such a short space of time in MotoGP.

“I’m very happy with how the first day went, because you always have a few nerves after a couple of months out,” said Marquez.

“I thought that I would take a little longer to get back ‘on it’, but right from the opening laps I felt very comfortable on the bike. We picked up confidence from the start, although obviously we can still improve. I don’t think the result today should be used as a reference point, because we are all trying out new things. I focused on simply finding a good setup and getting comfortable on the bike. I tried to put in a good time so that the day’s testing had a purpose.”

Valentino Rossi led the morning session and then finished fourth and a little more than four tenths slower. Rossi will be delighted with the test results, and he looked back to his former self. Aggressive, fighting and not showing any fear, a polar opposite to how he looked the past two seasons aboard the Desmosedici.    – with the Ducati nightmare already behind him – concluding the day a little earlier than the rest of what he can now again call his rivals.

“I’m very happy about the first day of testing with the M1,” said Rossi after the pit lane closed.

“After two seasons away I was able to come back on the bike and remember the good feeling I always had with it. I am also happy because I was quite fast from the morning. We worked on the settings to make some improvements and we made some good steps. In the afternoon we started to work on the new parts for the season. It’s just the first test but the potential is high and I am in a good position, I am in fourth place but not far from the other three guys. I am very positive that we can improve over the next few days but I’m happy with the start.”

First rider behind the big four factory boys was last seasons rookie of the season Stefan Bradl, who this season has official HRC backing. Bradl was 0.632 slower than Pedrosa’s fastest time, but will be encouraged with the start, and is over 1.5 seconds faster than his 2012 test times.

Cal Crutchlow on his Monster Yamaha Tech3 was sixth as he attempts to kick on from a breakthrough year in 2012, and he was just ahead of Go & Fun Gresini rider Alvaro Bautista who seventh  and the last rider to be within a second of Pedrosa’s time.

It wasn’t until Nicky Hayden in tenth that you saw the first Ducati, as their trials seemed set to continue, even though they weren’t expecting to be competitive bring the GP12 to Sepang.Hayden was more than two seconds off the pace of Pedrosa.

Andrea Dovizioso in his first real test with Ducati – Dovi posted a handful of laps in Jerez but was injured during the test – and the best he could manage was 13th, one place behind MotoGP rookie Bradley Smith who is on Dovizioso’s bike from last season, a penny for Dovi’s thoughts reading that.

Pramac riders Andrea Iannone and Ben Spies, also his first test with Ducati were 16th and 17th respectively and three seconds off pace. Spies did not ride in the afternoon session, and rumours have emerged that he won’t ride tomorrow either due pain issues in the shoulder he injured during the 2012 Malaysian race.

Aleix Espargaro and Randy De Puniet showed that they have improved over the winter, and that the ART is still the CRT bike to be one as they sandwiched themselves in between the Ducati’s.

IodaRacing’s Danilo Petrucci is sharing his BMW-Suter with team mate Lukas Pesek. The Czech rider did the morning session while Petrucci did the afternoon session as the IODA team are sparse on parts.

Michael Laverty made his MotoGP testing debut with the PBM’s ART bike as did Bryan Staring Gresini’s FTR Honda as they got used to the carbon brakes and Bridgestone tyres.