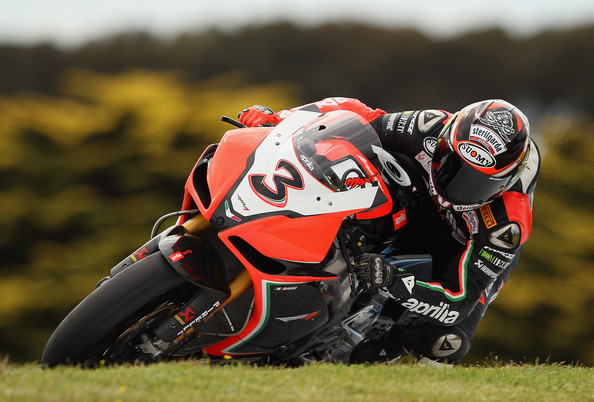 2012 SBK World champion Max Biaggi called an end to his illustrious career at the end of the 2012 season, but he just can’t stay away.

The Roman Emperor won five of his six world titles with Aprilia, but he isn’t tipping Aprilia to retain the crown he won for them last season. Instead the Italian is tipping his two main rivals from last season to battle it out in 2013.

Speaking to Italian paper , the two time SBK World champion said “It’s an easy prediction: they were second and third in the championship. Leaving the championship I gave them a hand. Melandri has been on the scene for 10 years and has more experience than the Brit, but in 2012 he made some important errors. BMW will do well, but so will Kawasaki and the first rounds will shape the championship season.”

In the same interview Biaggi was asked if he thought anybody could inherit his crown, and become the new star of SBK. His answer was Valentino Rossi.

“It’s hard to say, none of the present riders has the same career results that I started with. The new Biaggi could be Valentino Rossi, when he decides to switch championships.”

Inevitably the interview subject then turned to MotoGP. When asked about his former nemesis, Biaggi said “he’s returning to the bike that won the title, but he’ll find the number one rider Jorge Lorenzo who is in the condition to win half the races.” He was also asked who he thinks will eventually win the 2013 title unsurprisingly his answer was his good friend, and reigning World champion Jorge Lorenzo.

Max Biaggi was also asked about MotoGP rookie Marc Marquez. Biaggi was the last rookie to win on his premier class debut, a record that looks in very real threat with Marquez’s introduction into MotoGP.