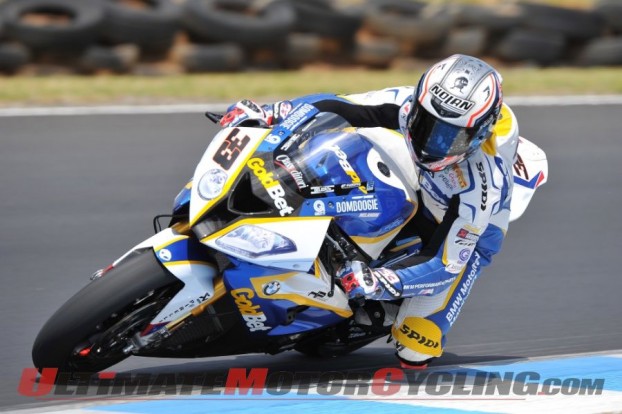 Melandri was concerned all winter regarding the condition of his right shoulder, and has undergone extensive tests and taken part in specific physiotherapy and workouts to try and rectify the problem, although this past week as he got back on his BMW the problem has returned.

The Italian is uncomfortable with his right shoulder, and says that it isn’t allowing him to ride to his maximum, and that is is causing strength issues and the muscles on his shoulder freeze up in certain direction changes.

Despite the extensive testing all previous medical exams have shown that there is nothing wrong with Melandri’s shoulder.

He is now contemplating the option of surgery to find the root of the problem after this weekends season opener, in the seven week gap before the second round of the season in Aragon.

Speaking to the Italian press, Melandri said, “My right shoulder keeps giving me problems. After three laps I end up not being able to ride. It’s the same shoulder that I was operated on in 2011.

“Last year it didn’t bother me and mechanically it seems okay, but I continue to have problems. I’ve been suffering since last November and no one can tell me why.”

Talking about starting the 2013 season under local anesthetic shots just to ride, the Melandri said, “It’s only a palliative relief. Finishing the two rounds, means that I’ll be battering myself even more.

“In my career I’ve undergone four shoulder operations, I know my body. I think it’s necessary to get to the root of the problem.

“After the first round I’ll take the first plane out and immediately go see Dr.Giuseppe Porcellini. Before Christmas, it seemed that physical therapy and a lot of gym would have been enough, but now I don’t think so.

“After the Australian round there will be a month and a half break before Aragon. If I go undergo surgery right away I could be back for the Aragon round and its better riding a single round 50% fit than carrying this problem for an entire season.”