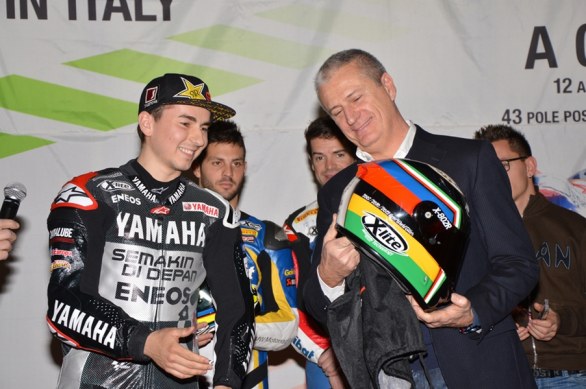 Nolan Helmets tonight held their annual Christmas party at Brembate di Sopra, Italy with all their employees, journalists and their riders that they sponsor.

Alberto Vergani president of the Nolan Group, however chose tonight as the opportunity to announce that Jorge Lorenzo will no longer be a member of the Nolan family (X-lite are a banner under Nolan) in 2013.

Just after the announcement Vergani presented Lorenzo with a special helmet, that had the cycling world champions rainbow stripes, and a number three on the top. The number three represents the amount of world titles that Lorenzo has won since wearing Nolan helmets.

Rumours have Lorenzo switching to HJC for 2013, although there have been no confirmation from either party as to what Lorenzo will be using in 2013.