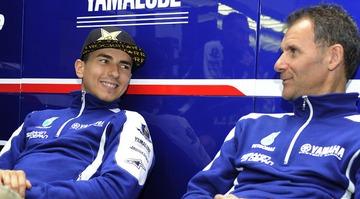 Jorge Lorenzo’s team manager Wilco Zeelenberg has told how his rider wasn’t thrilled upon learning he would be partnered by Valentino Rossi next season.

Zeelenberg, who has been Lorenzo’s team manager since 2010 and helped guide the Spaniard to two world titles along the way explained how Lonrezo was informed his former team mate would be returning.

“Jorge proposed another rider. But it is the responsibility of Yamaha to to pick the riders. And at Mugello in July, they told Jorge the truth. The Yamaha managers told him that they had begun to negotiate with Valentino. Jorge’s contract was already signed, and I can’t say that he broke into enthusiastic applause. But he has accepted the decision of Yamaha.”

Despite this Zeelenberg doesn’t think the level of tension will be first time round. “Sure Jorge wants to win. And Valentino wants to find out what level he is now at. Therefore I do not expect the problems that we have had in the past.”

“When Jorge was a rookie, he had  done everything to be as fast as Valentino. Valentino was not thrilled that it is understandable, ” Zeelenberg explained.

Whilst Zeelenberg is optimistic that the riders will be civil for the benefit of Yamaha, I don’t hold out much hope, a couple of wins for Rossi back on the Yamaha and the helmet might start to fly on the World Champions side of the garage, and if Rossi is constantly being beated by his team mate what does it do for Rossi’s confidence?