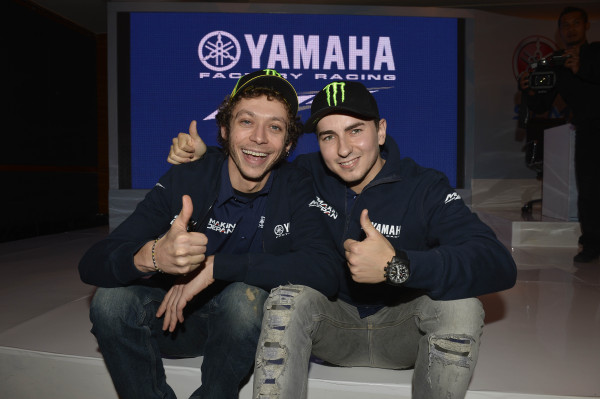 The Yamaha Factory Racing team and their riders Jorge Lorenzo and Valentino Rossi are on a promotional tour for Yamaha in the Far East. Today was the first stop and they were in Indonesia.

During a photoshoot and press conference at the Four Seasons hotel in Jakarta the pair helped reveal the new Semakin Di Depan (one step ahead) logo.

During the press conference, Uccio Salucci, best friend of Valentino Rossi, tweeted a little hint to when we may see the 2013 Factory Yamaha being unveiled.

What the tweet roughly translates to is that the Factory Yamaha will be either revealed in Qatar for the first race or at Jerez during the final IRTA test.

It would buck the trend of Yamaha using the Sepang tests to reveal all of their team, but they may still do that as no official word has come from Yamaha yet.