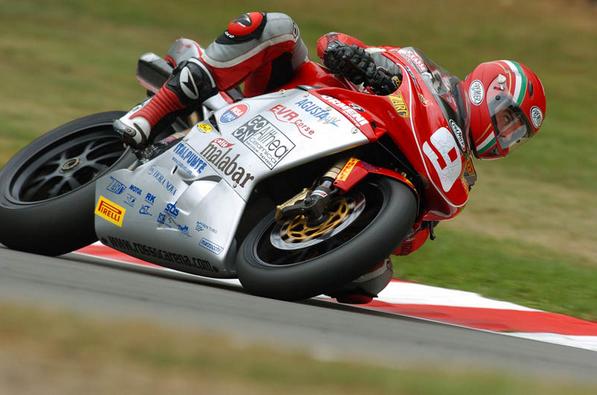 MV Agusta are back in international racing and will be running next season in the World Supersport series.

The famous Italian brand will be back in the international scene in 2013 on their F3 three cylinder 673 machine with support from Parkin Go and will field Luca Scassa next season.

The deal between MV Agusta and Parkin Go is a three year commitment and depending on new regulations for 2014 and success in the 2013 season, there is potential that we will see the project move up from the Supersport series into World Superbikes.

The decision to hire Scassa was an obvious choice for MV Agusta after he raced and won in the FIM Superstock Cup and the AMA Superbike Championship, as well as in CIV Superbike where he won the Italian title.

Current regulations mean that with their F4 machine they wouldnt be able to race in the World Superbike series, but due to the commercial success of F3, however, this allows the MV Agusta to obtain the approval of three-cylinder Supersport machine much like the Triamph 675.

For ParkinGO this remains a way to stay in the international racing scene. After running Luca Scassa in 2011 on a Yamaha R6, and then sticking with Scassa’s 2011 team mate, 2011 World Supersport Champion Welsheman Chaz Davies in 2012 on the Parking Go Aprillia RV4.
A MV Agusta statement said “MV Agusta, the market leader in supersports six hundred racing, have returned to racing. Having identified the best partner in ParkinGO Team. The two companies are linked to three years. The two companies are linked to three years.”
Another company in the World Superbike paddock goes to show how detached MotoGP has become. Nine companies represted in the SBK paddock compared to the three in the Grand Prix paddock shows how much Dorna have on their hands after the recent aquisiton.