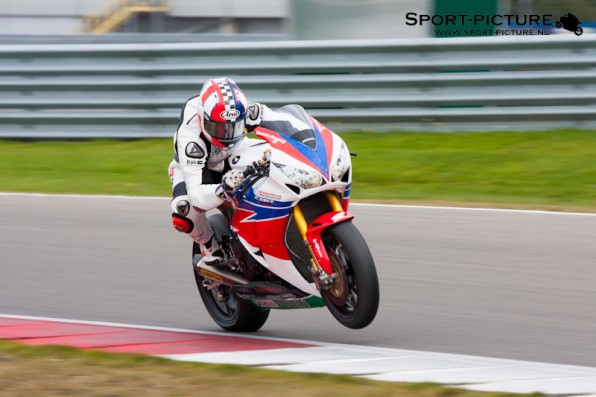 Today on GPxtra, I am lucky enough to be joined by current World Superbike star Leon Haslam.

Leon started a professional racing career with a debut in the 125cc class at Donington Park aged just 15 and he has raced against the likes of Rossi, Checa and Biaggi all his career.

Firstly Leon how are you? All fit and healthy?

Yeah, I had a few weeks off after the last race to recover from a few injuries, I still have a few screws in the bottom of my leg. But other than that I’m OK and, I’ve just started my training programme this week.

Last season on the BMW, how did it go? Thoughts on it?

For me it was one of my toughest seasons, not really through anybody’s fault. The bike was definitely a big step forward from what we had the year before. But breaking my leg first race of the season, and being taken out a couple of times it was just one of those seasons where we didn’t have luck on our side. But I’m looking forward to the future with Honda and hopefully get back to winning ways.

And for the next two seasons you will be on the Ten Kate Fireblade. Obviously exciting times back on the Honda. Are you excited with what lies ahead?

Yeah, for sure. Honda is a company I have always been with. And for me and my crew the prospect of going back and developing the bike it’s going to be an exciting few years.

After a test already how does the bike differ from the one you rode back in 2009 with the Stiggy Honda team?

The Stiggy was very privateer, but since then they have developed it a lot. It’s the same bike, but with Ten Kate it’s improved a lot since then. But even back from 2009 there are still some circuits I haven’t matched the lap times I did on the Honda. But the bike has obviously been developed a lot more and Honda are pushing to get it developed even further for next season. We have a good winter schedule ahead of us with testing and I’m looking forward to the future.

Obviously last week we all found out that new World Champion Max Biaggi has retired, are you surprised by his decision?

No not at all. He’s done the lot; to finish on a high at 41 is a fantastic way to go just after winning a championship. I mean when I was a kid I used to have posters of him on my wall, so to challenge for a title with him back in 2010 was a good honour, and I wish him all the best.

Yeah, I mean I was 15 when I first went to GP’s, and I had only been racing two years, so it was a big learning curve when I went into the GP paddock. I got to ride 125, 250 and 500s and it was a steep learning curve racing against the best in the world.

But obviously your now back in World Superbikes, in your opinion, what’s the best thing about WSBK?

World Superbike speaks for itself, seven manufactures all capable of winning on their day, and most weekends the top six or seven places have six or seven different manufactures. It just shows that even if you are on a factory bike, if you aren’t at the top of your game you won’t be challenging for race wins, and that’s what it’s all about. Everybody is on the same tyres, and at the end of the day you can still challenge for race wins. You don’t need to be on a all factory, singing and dancing bike, and it certainly keeps you interested and on your toes cause on a bad day you can easily be outside the top 10.

What are your thoughts about the prospect of World Superbikes possibly heading towards a more Superstock bike from 2014? Or doesn’t it really bother you?

For me it wouldn’t make any difference. I look at what Superstock bikes are doing now and they are only around a second, a second and a half slower than we are over a lap, and the top speeds aren’t that much different either. So to reduce an engine spec, in my opinion won’t make any difference. World Superbikes are based on road bikes anyway. Personally I love the development side of things anyway, and how it helps more forward as a sport. I love the fact that whatever we do on a race bike, within a year it’s on the race and the public can buy it. And I don’t think that will ever change.

What’s been your favourite race track you’ve been at?

Australia is always a favourite of mine. This year was the first year which I haven’t got onto the podium, and that’s because I broke my leg. But Australia is a place I really enjoy racing, and I think it’s a lot of peoples favourite as a race track itself.

And is there a particular person you would say is the best person you have ever raced against?

Obviously I have raced against pretty much everybody who is at the top of the game. The year I raced against Rossi was definitely a big eye opener, he was a hero of mine and to race against him was good. But it’s not so much who you look up to, it’s who you respect, and you have to respect the people who are doing the business, like the Lorenzo’s and your Valentino’s right now.

Obviously we see your family supporting you all the time, how important would you say they are professionally to you, as well as personally?

They are everything. The thing is with the family I’ve got, is it’s only ever lived and breathed racing, and to have them around me is something that I not only want, but it also benefits me quite a lot as well.  It’s not just at the race track too, I’ve been out trailing three times this week with my Dad, and my whole family is just fantastic , and it’s something I wouldn’t change for anything.

Finally, what are your hopes for the season ahead?

I want to try and bring the Honda back to winning ways, Johnny obviously manages to get a few each year, and he managed fifth in the championship, so I will try to improve on that, and try to get as many wins as we possibly can.

Thank you so much for your time Leon and I think I speak for everybody when I say we can’t wait to see you back on the top step of the podium next season.