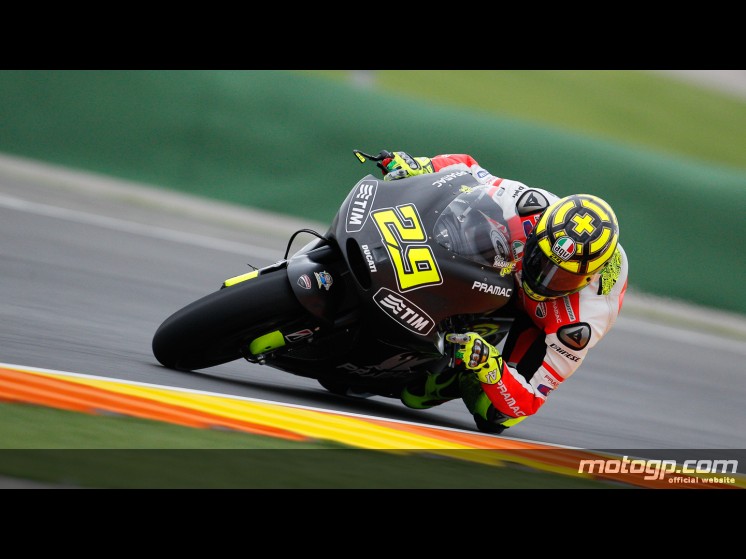 The career ender, impossible to ride, and rubbish. That’s just a few things which have been used to describe the Ducati Desmosedici. But can one of their new Italian recruits save the iconic Italian brand, and achieve what no man bar Casey Stoner, has been able to do, and master the Ducati MotoGP monster?

Andrea Iannone will join the junior Ducati team run by Pramac for 2013 and ’14, but what can Ducati expect from him?

Well Andrea comes into MotoGP with an outstanding reputation, and is very much in the Valentino Rossi and Marco Simoncelli style of riding.

From the seaside town of Vasto on the Adriatic coast, Andrea grew up like most Italians racing minibikes on beach front circuits, and his success has seen him inherit and embraced the ‘Rossi day glow yellow’ that all talented riders from there do, and now it seems to becoming as recognizable as the moon eyes is for Japanese riders.

Andrea is an aggressive rider, and one who will benefit from the move up due to his size and weight being a hindrance against the likes of Marc Marquez in the Moto2 class. Despite that he still managed to claim 8 wins in the intermediate category of Grand Prix racing.

Wonderfully smooth once he is in his rhythm Iannone can constantly pump out lap after lap and has become acknowledged in the Moto2 category for his race victories in which he gets out front and leaves the rest of the field for dead.

Andrea had also ridden the Ducati Desmosedici prior to his test in Valencia earlier this week.  He had a test on the Pramac GP11 around Mugello back in 2011 and had a further test on a GP12 again at Mugello this September.

During the second of his two tests this year, Andrea managed to post a best lap of 1’48.3 around the iconic Italian circuit. Not only would this lap have good enough to put Andrea 10th place on the grid for the race, it was also 0.2 seconds quicker than the qualifying lap of compatriot and Grand Prix legend Valentino Rossi on exactly the same bike. If that doesn’t show natural talent what does?

The weather conditions in the post season test in Valencia this didn’t assist Iannone, as he learns more about the MotoGP bike and tries to see if he can crack the Desmosedici code.

1’33.8 was the fast time in which Iannone managed in the test, just 1.511 seconds away from Sunday race winner Dani Pedrosa’s time. Not too shabby for a man who has just started his MotoGP career.

” I could not ask for or get more: here I have everything I wanted , “says Andrea Iannone. ” I’m excited about the team, the guys I immediately established a good relationship with the bike and the feeling is not bad.”

“Despite the track conditions today I immediately felt at home. Initially on a damp track I have dedicated myself to understand better the behavior of the Ducati in these conditions, then end the day with slicks times have improved markedly,” Iannone added.

Whilst I am not claiming that Iannone will suddenly be the messiah on the Ducati and will be able to ride the Ducati like Casey Stoner, the Italian leaving the Bologna factory makes an interesting point.

“It’s interesting to compare Dovi and Iannone, because Dovi has had more experience on the MotoGP, while Iannone has had none and hasn’t ridden a Honda or Yamaha. Maybe this can be an advantage for Iannone, I’m not sure, but coming from Moto2, his mind is more open,” said Rossi.

This is true, the only MotoGP experience that Iannone knows is a Ducati, that’s how he has learn to ride a MotoGP bike, aboard a Ducati.

I think Andrea will surprise a lot of people this season, and especially at Mugello I wouldn’t be at all surprised to see Andrea challenging for the podium. But we will get a better idea of the pace that Iannone posses when the whole Ducati squads, including test riders Michele Pirro and Vito Guareschi head to Jerez for the second of their 2013 tests.