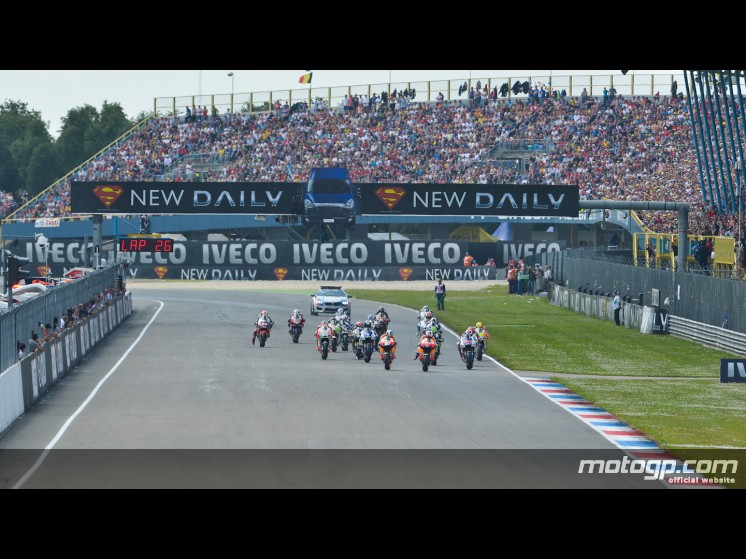 Carmelo Ezpeleta DORNA CEO has proposed a minimum wage in Grand Prix racing to be introduced in 2014 when the new rules get released.

The global economic situation has hit everybody hard. It has hurt people but it has also effected the sport. The world champion in Jorge Lorenzo last year couldn’t get a title sponsor. But teams have a problem with budgets.

A team will go into a season with a budget of 12-14million euros, and riders are the ones who are taking the hit in the pocket due to costs from the factories going up for components. A Honda RC213V can cost up to 2.5m euros per bike.

Obviously this leaves teams, especially the smaller teams who struggle without huge sponsors such as Repsol and Phillip Morris the funds to budget a rider.

The best example of showing how bad the situation has got for the smaller teams is the situation of Alvaro Bautista. Back in the 250’s Alvaro Bautista signed for Aspar and received 700,000 Euros. The same rider who has recently re-signed with Gresini is now on around 100,000 Euros. Three years ago in the same Gresini team Marco Melandri picked up one million euros. So a rider in a small class can get SEVEN times as much as in the premier class?

Well this wasn’t just a thing of the past. In the current top 10 best paid riders, only 7 of them are in MotoGP. Marquez, Vinales and Espargaro are all on more money that over half the MotoGP field. Vinales is 17 years old, and is 7th on the list earning roughly 300,000 Euros. That’s astronomical.

Whilst some riders have personal sponsors, and in turn personal sponsors can help fund teams and give riders rides, but it’s not always the case. In the case of the Blusens BQR team this is evident. Hernandez receives next to no salary for racing and Ivan Silva around 40,000 euros. These riders are run under the same banner as Vinales as his team.

But its not always a case of bigger teams having more money for bigger riders. Hector Barbera last year was offered 200,000 euros for a ride on a CRT machine, instead he elected to take 50,000 and stay in Pramac on a Desmocidici.

Whilst some teams are struggling to even compete there are also some small teams to which this doesn’t apply. LCR Honda is a prime example of when it can sometimes smaller teams can be assisted. LCR rider Stefan Bradl gets his salary paid for by HRC. Thus meaning that Lucio Cecchinello doesn’t have to worry about how to keep, and pay his rider.

Whilst all of that is facts and there’s numbers in there to hit you and shock you, and it will have succeeded to most of you.

All of this is one of the reasons Carmelo Ezpeleta is severely pushing cheaper bikes. He doesn’t want to, as he puts it “exploit a low paid work force.”

“But first I have to fix other things,” Ezpeleta adds, he is referring to the new rules and costs reductions for 2014 “If I get that equipment is less, I’ll make sure you get a minimum wage that has to be in, around, to 300,000 euros and the team can not guarantee can not be here,” he adds. “There are more motorcycle riders. A MotoGP rider must have a minimum”, stresses Carmelo.

The big riders who are all on lots of money are all advocates of this move by Ezpeleta and Dorna. Although they don’t want it to just stay in MotoGP. “It would be a good idea to make an association to regulate the contracts, the contracts also Moto2 or Moto3, but they should from that initiative. That would be nice.” Says Valentino Rossi.

These men are risking their lives every time they go to work, and its refreshing to see finally that they could be getting rewarded for the risks that they take every single day of their jobs. They won’t stop because they love it, but they all deserve more.

One thought on “MotoGP Minimum Wage?”