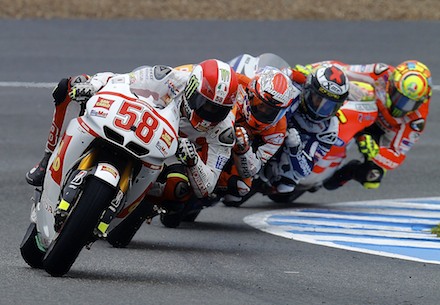 Valentino Rossi, the man some people call the GOAT (Greatest of all time) has claimed that MotoGP is boring.

“Now is the worst moment in MotoGP since I joined in 2000,” Rossi told BBC Sport. “It is the most boring moment. Races are quite bad and it is very difficult to stay awake.” But is he right?
I have since been doing some research into what a lot of you think about the whole thing. And the general consensus is that the doctor is right.

The general consensus is that the Moto3 and Moto2 races are far more entertaining to watch and that the MotoGP race is somewhat of a let down. Now if the people who watch the races think this, and one of the best ever riders think this, what is the answer? How do we rectify this so that the sport doesn’t get worse?

Well to start, there has to be a limit on technology. Yes it is fantastic now with some of the things that bikes can do and it is astonishing with all the ABS, and traction control that is all being transferred into road bikes that you or I could ride, but this limits the racing. You see when they have “acceleration, brake” graphics on the screen that riders can now pin the throttle open and 95% of the time they get out of the corner fine.

Now again whilst that is a fantastic advancement for motorcycles in racing it does make the racing boring, its like a simulator for riders, almost with the threat of a highside. Now don’t get me wrong, I don’t want to danger the riders in anyway, and don’t want to make it unsafe, and highsides are still a very real risk for riders, but it will add more skill, and give riders like Stoner and Rossi who use their right wrist as traction control the chance to close up and make up ground.

Another way to possibly bring some excitement back into GP racing would be tied into the first, and that would be to possibly bring in a rev limiter or control ECU. This is something that Dorna are pushing hard, and are coming up against stiff competition from the factories, especially Honda on. Even as recently as Nakamoto San saying “As I said, that won’t be the case, because they will not enforce single ECU from 2014. Dorna must discuss about technical rules with MSMA before a decision is made. We have a five year contract with Dorna(2012-2016) and it has detailed clauses. With this contract, Dorna cannot do anything unless we agree.”

Honda and the factories argue that it will limit their development and that is one of the reasons they are in the sport for the first place. But a control ECU or rev limiter would certainly help, and allow smaller teams to get closer to the front.
A third simple way to help bring the racing closer together would be for a free tyre choice. It would give teams, especially satellite teams a chance to get more money in, and would make it more competitive.

You may go to Sepang a Bridgestone circuit with a Yamaha win, then down to Phillip Island a Pirelli circuit and Honda dominate, then over to Motegi where Michelin take the win with Ducati. It’s just a simple thing to help change it up a bit, and with teams getting more money for being persuaded to use their tyres gives them all the help they can get.

A further “technical” change would be to let the teams have more fuel. Whilst bikes are on rails to ensure they use all their fuel to the right limit and bikes are shut off to make sure that they don’t use too much as certain points.

Forget it all, they want to limit costs, but in the grand scheme of things an extra few liters of fuel isn’t going to change that much. They drive and travel the world, and they are worried about a few extra gallons of fuel over a season. Yes they would face pressure from green groups, but that’s just the business we are in, we won’t ever be popular.

But with more fuel they can change these railed machines into fire breathing monsters drifting around corners and bring the fun back.

The final thing that I would change isn’t directly on the track, its with Dorna, and namely their video rights. How many times have you seen something amazing, whether it be a crash or a pass or anything, and you go on YouTube or somewhere to find it, and get nothing, you go to the MotoGP website and see it on there, but unable to view without a video pass.

Now not only is it annoying for fans, but it limits other fans, you can be running through everything to your friend, try to find the clip, and nothing. It limits people getting into the sport. It also limits sponsors. If you know that you can have your brand plastered all over YouTube being viewed by millions and millions of people would you not be a lot more willing to invest? Instead its restricted to people who watch the sport and that’s it.

Along with highlights, get the press conferences up on there, nobody wants to pay to watch a press conference. Most people find it boring, but how gobsmacked would you have been if you had seen Stoner announce his retirement. Its all about interacting with people and its something Dorna seem to be forgetting.

Now I have just listed a few things there, and I have seen hundreds of more ideas from you on this, and I could go into a lot more detail with some of them. Nobody is saying Dorna have an easy task here, and they will upset people, and have to step on a few toes to get where they want to be, but that’s just what is required now to save our great sport.

What do you think is the answer? Do you think that my suggestions above would help bring the sport back to the days of the late 90’s, early 2000’s when you would go into a race weekend with no idea who would win. Let me know