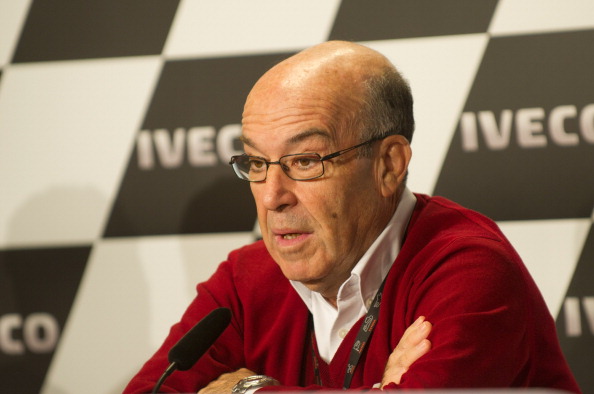 MotoGP 2014 has been dubbed the year that will resurrect the sport. But what changes are in store from Ezpeleta?

Carmelo Ezpeleta, Dorna CEO, knows that the sport is stuck in a rut. “At the moment MotoGP is a technological battle that leads nowhere.  For me, a championship ideal would engine more or less equivalent, with the frame, the ‘structure and visibility to act as discriminating. ” He said during a recent interview with GPWeek.

This weekend at the MotoGP 2012 season finale in Valencia the Grand Prix commission will sit down with Dorna and will finalize the 2014 rules. Ezpeleta had aimed to get the 2014 rules out by May 2012, but six months down the line he is in a much stronger position with Bridgepoint’s acquisition of World Superbikes.

Ezpeleta and the GP Commission have been pushing for cheaper, closer racing, without taking away from the prototype, ultimate racing that only Grand Prix racing offers. Whilst met with some skepticism and initial reservations from factories, and more specifically Honda, who felt that any substantial changes to the rules would hamper their main purpose of Grand Prix racing, which is research and development to transfer into road bikes, even they now appear to be coming on side.

Honda have recently unveiled plans to release a “customer” RC213V available for teams to buy for the region of 1 million euros. This would fit the Dorna plan of cheaper racing offering teams the chance to buy a bike rather than pay triple the amount to rent a pure prototype for the season, such as Gresini and LCR are currently doing.

HRC vice president Nakamoto -San said in the same interview with GPWeek that plans were temporally delayed for these plans to see what the new rules hold in store for 2014.  But there may have been a few questionable truths in this with strong rumors that Honda are on the verge of replacing outgoing Michelle Pirro’s FTR Fireblade with Ryuichi Kiyonari on one of the customer spec RC213v’s under the Gresini banner for 2013.

If successful and Honda get what they require from the season, in a interview with MCN Nakamoto said that it wouldn’t be beyond the realms of possibility to produce up to 20 bikes to sell for 2014.

Yamaha and Lin Jarvis on the other hand have very different suggestions as to what they can do to assist grid numbers and competitiveness whilst lowering costs. Rather than following Honda and building a customer M1 Yamaha plan on leasing prototype spec M1 engines to non factory teams in an effort to keep it pure prototype.

Yamaha boss Lin Jarvis said to  MCN “We have been studying internally what we might do and the biggest thing is leasing an engine and electronics package to teams and chassis suppliers. If we decided now we could probably do it for 2014 but we need to know what the regulations are.” This statement from Jarvis has come just in time to let Ezpeleta how they can assist in the situation.

“Selling an M1 will never happen and we are happy with the four-bike strategy. (current rules state that no factory can have more than four prototypes on the grid) That’s the maximum our engineers and resources can handle. Our chassis will be different to what a CRT entry could produce but it is the engine that is the biggest difference in MotoGP today.” Jarvis added.

Yamaha are therefore keen to keep the racing pure prototype and will offer factory based electronics in a customer chassis built from an independent company such as Suter or Kalex for satellite teams. Current rules wouldn’t allow this, and a CRT team have to race with a highly tuned R1 engine rather than a M1 engine.

This proposal by Yamaha may seem to be an exceedingly different suggestion to what Honda are offering, but beneath the surface, both manufacturers are pushing for the same thing, and that is for a non spec ECU.

This news from Yamaha comes fresh from the news that Suzuki have to commit to at least 2016 with their MotoGP project and not just the one year they intended. Ezpeleta recently said “If Suzuki wants to be back they will have to commit for ’14, 15 and ’16 and be in line with the other factories.”

With Jarvis and Yamaha willing to support another 4 bikes, this would leave 8 “Yamaha” bikes on the grid for 2014 if the rule gets approved this weekend. Along with Suzuki planning a full two rider return for 2014, and Honda planning to sell a “lesser” RC213v, with Ducati’s participation there could be well over 20 fully prototype bikes on the grid.

All will become clear this weekend at the final round of the season in Valencia, but what needs to be as certain is the new rules will improve the sport.