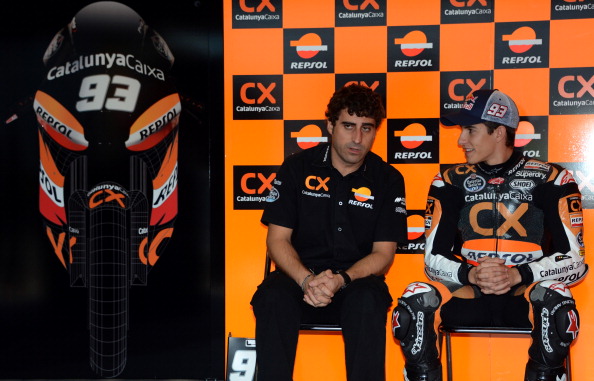 Marc Marquez is a double world champion at the age of 19. He is going to be on one of the top four bikes next season with the Repsol Honda team, yet many people still question the ability of the young man.

The majority of fans will on see Marquez on a race day, see him win the race. We have heard all sorts of conspiracy theories as to why he is so dominant in a control category. The accusations have ranged from a special engine, to bias’ stewarding.

But one thing that hasn’t been banded around is what Valentino Rossi said back in 2009. “A great rider differs from a great champion in his head.” What he was implying was that the difference between a good rider and a great one wasn’t anything other than what’s in his mind.

Marquez critics have said he could possibly have a better engine in his bike from Honda. Well he has one of the best engines in his head, his brain. Whilst a mechanical engine is made from pistons and cylinders, it’s all useless without the man on top.

“For me it’s awesome. Never seen anything like it in my life, even when I worked with Gardner and Lawson,” says Didier Langouet engineer an engineer for Suter, the chassis Marquez has been using and it’s the first time the brand has won the Moto2 title.  Langouet belives Marquez has technical knowledge and understanding way beyond his years. And potential to even be mentioned in the same breath as Rossi.

“He is very young and get’s me to understand things and passes on info I have not seen in anyone,” added the engineer, “It is difficult to compare riders. they’re different. But for me, Marc is more efficient as a rider. ”

You have there words from a man who has worked with some great 500cc world champions. If Marquez can get close to Gardener or Lawson then he will have had an exceptional career. But it’s not just his chassis engineer who is singing his praises.

Patrick Primmer, an Australian technician who works for Öhlins, couldn’t believe the first time he met Marquez. “There are riders who need years to convey what they feel on the bike and it the first day, I was stunned.”  Primmer was really impressed with Marquez’s ability to describe exactly what he wanted and his work with his crew chief Santi Hernandez.

Marc Hernandez is a man who has been in the paddock and worked with such riders as Alex Crivillé, Valentino Rossi and Sete Gibernau, but for him the most astonishing thing is not what the fan can see.

“Telemetry says a lot about Marc. It’s amazing how he leads, how he accelerates, how he handles corners. We are surprised how easy it is to adapt his riding around the problems of the bike and how flexible he can be” reveals Hernandez. “He knows where his weaknesses are when riding, and he can improve over time. Many pilots are not trained.”

Juan Martinez Aspar, a former rider and current team owner was astonished when he looked into the data behind Marquez. “Comparing our telemetry with it’s amazing what you see,” he says.

Aspar adds “He has sensational cornering, about 8 to 10 km / h faster than anyone else, it allows you to have two or three hp in hand when accelerating because these bikes and engines are the same.It’s not that his motor accelerates again, is that it accelerates more and much earlier.”

Hernandez backs up this information. “When you have fast cornering, engine speed is high and the acceleration is greater. With these engines, being the very lowest standard when you rev, it’s difficult to get the best motor torque.”

Marquez is an exceptional talent, and his ability under the helmet is why he will win more than one premier class title. I can’t wait to have him replace Stoner as the fourth alien.