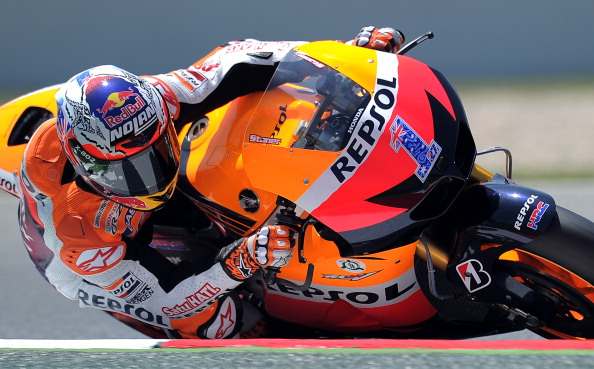 There won’t be a dry eye in the house this weekend when Casey Stoner races at Phillip Island for the final time on a MotoGP bike this weekend.

Casey Stoner has won five consecutive Grand Prix at the Island (4 on Ducati and 1 on a Honda) and has been nearly unbeatable, not loosing a single 800cc race. And he is hoping that he can make it six in a row.
The Australian fans will be out in their thousands. They never got a chance to say farewell to  either of their heroes before, with both Wayne Gardener and Mick Doohan being forced into retirement without a chance to bid them a fond farewell. Advance ticket sales already suggest double the attendance of 2011 where Stoner clinched his second world title, and with anticipated general admission sales the circuit officials are expecting a record attendance surpassing even the 1989 crowd that gathered.

Casey Stoner has confessed that he doesn’t know exactly what it is that makes him so formidable at Phillip Island. He had never raced there before racing in the world championship so has just as much knowledge and experience of the track as his rivals. Whether its how the track ebbs and flows, or if it is the fast sweeping bends that Casey can ride with such a plump.

But whilst this was set up for a fairytale ending the events of Indianapolis have put a real obstacle in the way, that and the men from Bridgestone.  Casey broke his ankle back in August, and as hoping to be at least 90% fit now, but he isn’t. In Motegi he was upset and disheartened by how little his ankle had healed.

Along with the ankle problem, there is the issue that the 2012 Bridgestone tyres do to his Honda RC213V. “It’s frustrating that my last few races are going to be grinding it out on tyres that aren’t a joy to ride,” says Stoner. “When I first tested this bike at the end of last year it was probably the best bike I’ve ever ridden, but now it’s one of the worst and most difficult bikes I’ve had to ride, and it’s all because of [the 2012] tyres. It’s very frustrating to finish my career riding with these issues.” Said Stoner.

But with these two major problems there are also two glimmers of hope for Casey. Since he has had injury and returned Dani Pedrosa has won four of the five races. So the bike clearly conquered some of those gremlins.
HRC vice-president Nagamoto San has also expressed his optimism that Casey will fare better this weekend. With Phillip Island being a left handed circuit (anti-clockwise) the slight weight imbalance means the Honda shouldn’t suffer from chatter as much.

The left handed circuit is also the cause for optimism regarding the ankle. “I’m hoping Phillip Island will be quite a lot better,” Said Stoner.

“The two tight corners on the track (Honda hairpin and MG corner) are rights so it’s not ideal, but most of the corners are left-handers. The problem is that my ankle won’t move, it won’t flex when I’m trying to pick up the bike out of corners, so it’s pushing against what I’m trying to do. It makes life hell out of slow corners, but the faster corners aren’t so bad because I don’t need to pick up the bike so quickly to get on the gas.” Stoner added.

Whilst not ideal, it’s certainly better than the two circuits Casey has been at since he returned, both of which were clockwise circuit, resulting on extra pressure of Stoner’s right ankle.

The Phillip Island Grand Prix is always an event in itself. It is worth getting up in the ungodly hours any year to watch it. Casey Stoner owns the circuit. He will slide round the now “Stoner Corner” named after him. The track itself has undulations and positive camber corners. The elevation changed and the scenery make it unlike anywhere else in the world. It is, in my opinion the greatest track in the world.

But this weekend will be a once in a generation event. The rawest and most talented rider this paddock has seen in the last twenty years (again my opinion taking over there) leaving his home circuit with hundreds of thousands of fanatical Aussies with a chance of making history. Put it this way, would you elect not to watch the last even Jimmy Hendrix concert if you had the choice? It no uncertain terms, it’ll be the last time you can watch the best rider, on the best bike, at the best track.