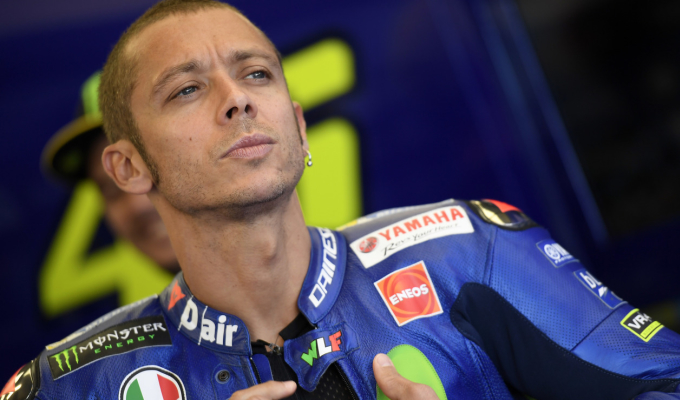 Valentino Rossi has undergone surgery to repair his right leg after suffering displaced fractures of the tibia and fibula yesterday evening.

The Doctor was training on a dirt bike when he crashed, badly breaking his right leg – the same one he broke back at Mugello in 2010. Rossi was then taken to a local hospital, the Ospedale Civile di Urbino, for examinations where it was determined that he would require surgery.

Then transported to the Azienda Ospedaliero-Universitaria Ospedali Riuniti’ in Ancona, Rossi was sedated and went under the knife. Dr. Raffaele Pascarella, Director of the Orthopedics and Traumatology Division of the Riuniti hospital operated on the Italian between 2am-3am, where he fixated the fractures with a metal pin  – a locked intramedullary nail – without any complications.

Earlier this morning, Rossi thanked the staff who helped him and apologised for the accident that has ruled him out of his home Grand Prix in Misano next weekend.

“The surgery went well,” said the 38-year-old. “This morning, when I woke up, I felt already good. I would like to thank the staff of the Ospedali Riuniti in Ancona, and in particular Doctor Pascarella who operated on me.

“I’m very sorry for the incident. Now I want to be back on my bike as soon as possible. I will do my best to make it happen.”

Dr Pascarella described Rossi’s break as a “complicated fracture” and said that Rossi will spend the next three to four days in hospital as doctors continue to monitor the leg and ensure there are no complications.

He also said that Rossi will require 30-40 days to recover to the point in which he will be able to compete in MotoGP again. This will rule Rossi out of both the Misano and Aragon Grand Prix with Japan touch and go. Free practice for the Japanese Grand Prix at Motegi is in 42 days, meaning Rossi will more than likely target Motegi as a return.

Whether Rossi’s surgically repaired leg can withstand the travelling and physical toll that three races in three weeks presents with the flyaway races remains to be seen. Rossi is expected to give an update to when he is targeting to return next week.