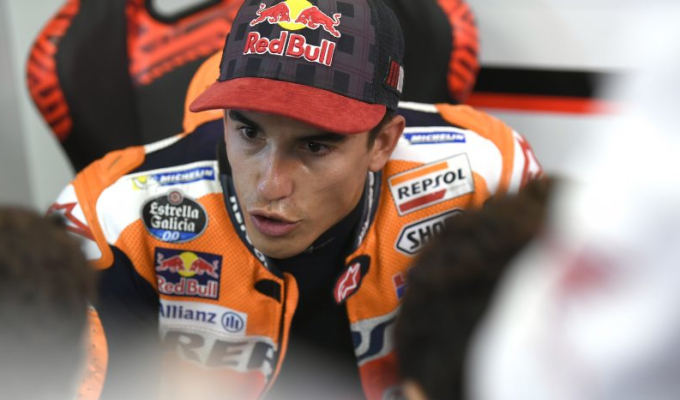 MotoGP series leader Marc Marquez said that he and his Repsol Honda team were able to work on some vital set up changes required for this weekend’s Austrian Grand Prix at the Red Bull Ring.

Marquez’s decision to change bikes early in the Czech Grand Prix last weekend proved to be a masterstroke, handing him a comfortable victory around Brno. Marquez along with the rest of the MotoGP paddock stayed in Brno Monday to complete a one day, post-race test.

The World Champion ended the test second to Valentino Rossi but said that he was able to make some important changes to his RC213V in order to minimize the damage in Austria. Marquez struggled to fifth position in last year’s race, finishing nearly 12 seconds off race winner Andrea Iannone.

The three big acceleration zones of the Red Bull Ring, partnered with the aggressive power delivery of the RC213V means that the Red Bull Ring could quite possible be the worst circuit on the calendar for Honda.

Marquez looked to take the positives from last weekend, noting that Brno used to be a circuit they struggled at and with Monday’s test, they managed to focus on changes they can make this weekend.

“The Red Bull Ring is a circuit where we struggled quite a bit last year but hopefully this year it will be different,” said the 24-year-old.

“Brno also used to be a challenging track for us but in the end we got a fantastic result, so we’re going to Austria feeling positive. In the post-race test we were able to look into several aspects of our bike’s setup, also in view of the next race, such as getting better acceleration and reducing the wheelying.

“Of course we also need good stability on the brakes so we’ll see; as always, it will be a matter of finding a good compromise. The Red Bull Ring round is also important for one of our main sponsors, and we’ll do our best to get a good result for them and to gain important points for the Championship.”