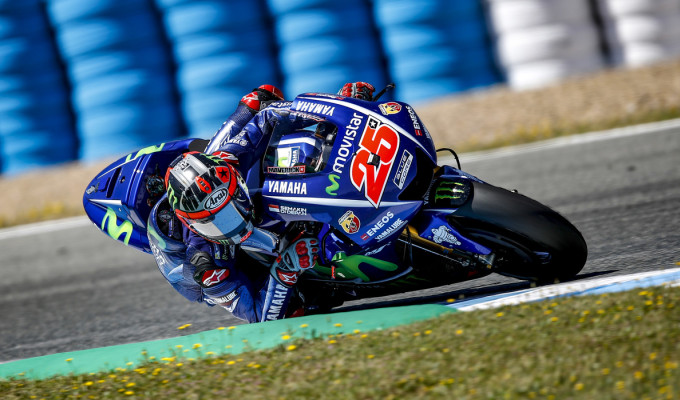 Maverick Viñales has arrived in Le Mans in a bullish mood, not only aiming to win his third race of 2017 but to also regain the lead in the MotoGP World Championship.

After a stellar start to his Yamaha career, the Spaniard had difficult races where an early crash and tyre troubles saw him fail to finish in America and salvage a sixth place last time out in front of his home fans in Jerez.

Searching for answers after the tough race weekend in Southern Spain, Viñales and his Yamaha team appeared to find them a day later when he topped the post-race test at Jerez, leaving a bittersweet taste over the weekend.

“The race in Jerez was very difficult for us,” said the Spaniard.

“Now we have to understand about what happened and try to improve this weekend at the Le Mans circuit. Luckily during the test on Monday in Jerez we had a totally different result, it was a really good test.”

Before the Spanish Grand Prix, Viñales joined a whole host of other factory riders for a private Michelin arranged test at the Bugatti Circuit in Le Mans. The French track has recently been surfaced and with a lack of data, the French tyre manufacturer was keen to gain some data ahead of this weekend.

In typical Le Mans fashion, rain hampered the testing day. However, that didn’t stop Viñales from ending the day fastest with a late lap once large portions of the circuit had dried.

Viñales’ first MotoGP podium came at Le Mans 12 months ago, and the 22-year-old has said that tight, stop-go nature of the Bugatti circuit suits his riding style.

“For that reason we’re arriving in France with a positive mind. Le Mans is a good track for us, it suits my riding style, and we can do a really good job there,” he said.