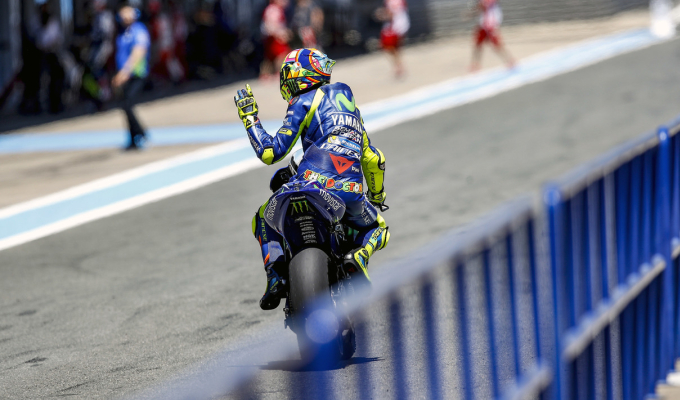 MotoGP World Championship series leader Valentino Rossi has said it is important he is immediately competitive this weekend in Le Mans.

The Italian saw his lead atop the World Championship drop to just two points after an extremely difficult race last time out in Jerez. The Doctor battled tyre issues to eventually finish tenth place, 38 seconds behind race winner Dani Pedrosa.

Before the race in Jerez, Rossi was joined by team-mate Maverick Viñales and some other factory riders for a Michelin test at the newly resurfaced Bugatti Circuit at Le Mans. Despite rain playing a big part in the test, both Yamaha riders were extremely quick, an encouraging sign for the Movistar Yamaha team.

Despite the positive test and retaining the lead in the World Championship, Rossi knows that there is a lot of work to do with the bike, especially heading to a circuit that has historically favored the Yamaha.

“After the difficulties during the Jerez weekend, the Le Mans GP will be very important,” said the 38-year-old.

“Yes, it’s true that we are still first in the championship standings, and this is nice for us, but we need to improve the bike to be really competitive.

“The test in Jerez was important and we understood some positive things. Now we will have to work well from the first session in Le Mans and we have to try to be immediately competitive.”

In his 21st season in the Grand Prix paddock, the Doctor is aware of the history of changable weather conditions in Le Mans. With this weekend looking to be no different, the Italian has said he hopes for dry weather at a circuit he hasn’t won at since 2008.

“We are feeling positive and we want to get back to working on the bike right away. I also hope that the weather conditions will be good, we need to test the bike in dry conditions,” he said.