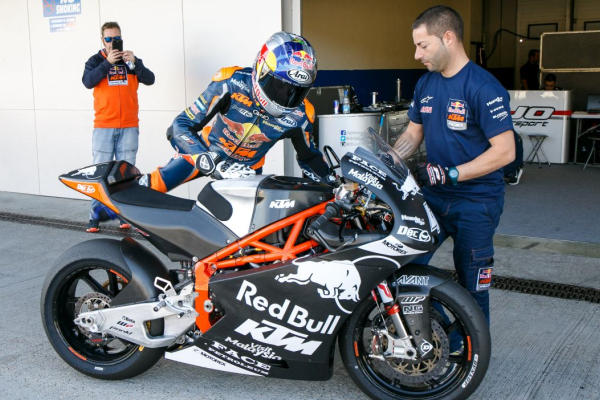 2017 will see many of the top young riders in the world move into the Moto2 class after a big shake up in the lower classes. Moto3 World Champion Brad Binder, Pecco Bagnaia, Jorge Navarro and Fabio Quartararo are some of a few of the big names making the jump from Moto3 into the intermediate class.

After the second day of the Jerez test, Pecco Bagnaia was the fastest of the four, ending the day in eighth position, posting a time just 0.8’s behind the fastest time of the day, set by Taka Nakagami. As part of the newly formed VR46 Moto2 team, Bagnaia was impressed with the base setting of his Kalex bike.

“I’m happy with this debut in Moto2 and the new team: yesterday we started on the right foot and today I was able to be fast right from the beginning. I found a good pace and this will be very useful for the race,” said the Italian who won two Moto3 races last season.

“The setting on which we have been working allows me to ride as I want and this is very important if we think about the future.” Fabio Quartararo was twelfth fastest of the Moto2 riders in action down in Southern Spain and he will be hoping for a much more successful period in Moto2, after failing to live up to the huge reputation that he had formed in Moto3.

The Frenchman was the busiest of all the riders over the two days in Jerez totalling in nearly 200 laps and he said he is having a lot of fun on his Paginas Amarillas HP40 Pons bike.

“I am very happy with this first contact. Gradually I understood the bike gone. At the end he controlled increasingly out of corners and I have a lot of fun. Now I am waiting to get back on my Kalex next week,” he said. Quartararo’s CEV rival Jorge Navarro has moved into the Gresini team to replace MotoGP bound Sam Lowes. Navarro ended the second day in fourteenth position and just four tenths behind the Frenchman. Navarro said the weight and the speed of the Moto2 machine was extremely different to his old Moto3 bike.

“Today was all new to me: I went up for the first time riding a Moto2 and I also started to work with my new team,” said Navarro.

“The feelings were very positive, because we started to work calmly, methodically to track each time, and end of the day my feeling with the bike was already good enough. Of course at the beginning I felt a lot the speed difference and the greater weight of the bike compared to a Moto3, but the team did a great job, helping me a lot, and in the day I got more and more confidence.

“I am very happy with this first day of testing and I’m looking forward to getting back on the track tomorrow to continue to work with great enthusiasm.” 2016 Moto3 World Champion Brad Binder has had the toughest start of the rookies with his Red Bull Ajo KTM bike. Whilst all the riders are jumping on new bikes, Binder has to be the pioneer in the new KTM Moto2 machine, as well as learning the much more powerful 600cc bike.

Despite struggling for single lap times, the South African has said he has enjoyed his first experience on the Moto2 bike, but said he will need to complete a lot more laps before he has a better idea on what he needs to go fast on the Moto2 machine.

“These two days of testing at Jerez have been very fun, and I have really enjoyed riding,” said Binder. “I have tried to fully understand how to ride this Moto2 bike and I have had a great time. I have begun to notice improvements and find the way to go, but I know I will need many laps to understand it 100%.

“It was strange, because after a few consecutive laps I set a good time, but after going through the pits, I couldn’t understand how I had been able to get it. I just need to keep working hard and little by little everything will go better.”