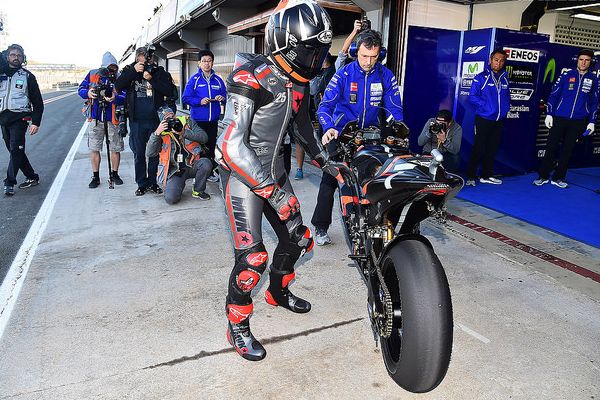 After topping the first day of testing, the factory Yamaha team have said they were extremely impressed by the speed of new signing Maverick Viñales.

In a result which shocked nobody, Viñales posted the fastest lap of the opening day of the final IRTA test of 2016 at the Ricardo Tormo Circuit in Valencia, ending the day just two hundredths of a second ahead of his new Yamaha team-mate Valentino Rossi.

Due to contractual obligations, Viñales was not able to speak to the press after the test and will not be able to talk about the YZR-M1 until the new year when he is a fully contracted Yamaha rider. However, Yamaha Team Manager Massimo Meregalli said that the Yamaha team were impressed with Viñales after his first day on the bike.

“Maverick told us he hadn’t been able to sleep all night because he was so nervous,” Meregalli told Spanish newspaper Marca.

“We have been impressed because it was his first day on the bike and we only gave him last years bike, it’s more or less the bike Jorge was riding. We made a few small changes and we also saw that he’s very sensitive which is really good. Every time we changed something on the bike, however small, he felt it, which is important. I was very confident with everything we tried.”

Meregalli confirmed that the plan was make Viñales ride the 2016 bike on Tuesday and most of Wednesday before trying some 2017 parts. The Spaniard will have to wait until the private Yamaha test in Sepang next week before he gets his first taste of the 2017 M1.

“The plan was to ride the 2016 Yamaha. We hope that in the second part of Wednesday we can try new things,” he said. “He will probably try the new chassis or bikes next week in Sepang.”