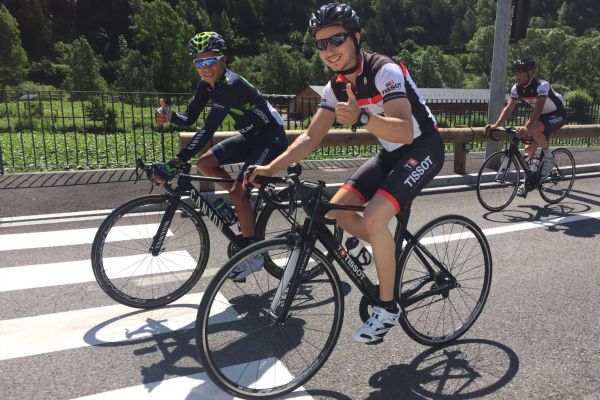 Reigning World Champion Jorge Lorenzo spent his Monday with the Movistar Tour de France team, with the legendary cycle race on an off-day on Monday.

The MotoGP World Champion shares the a title sponsor with Tour de France front runner Nairo Quintana, Movistar, so the duo decided to make the most of the tour’s day off, with Lorenzo joining the Columbian and some of the other members of the Movistar team.

Lorenzo met up with the the Movistar team in Andorra for some “light” training, before the tour continues Tuesday and Lorenzo heads to the Sachsenring for the upcoming German Grand Prix.

Lorenzo said that he beleives his compatriot Dani Pedrosa would be stronger than he was in a cycling race due to his fitness and weight.

“On a race bike, I think would win Pedrosa, he’s ridden road bikes for much longer and he is lighter. Marquez is also very fit,” said Lorenzo.

The Spaniard confessed he spent the majority of their 50 minute riding talking to Quintana, asking him an array of questions from his diet and where he lives to how many days he can go on holiday before finding himself riding his bike again.

Quintana is currently fourth in the yellow jersey standings after ten stages.