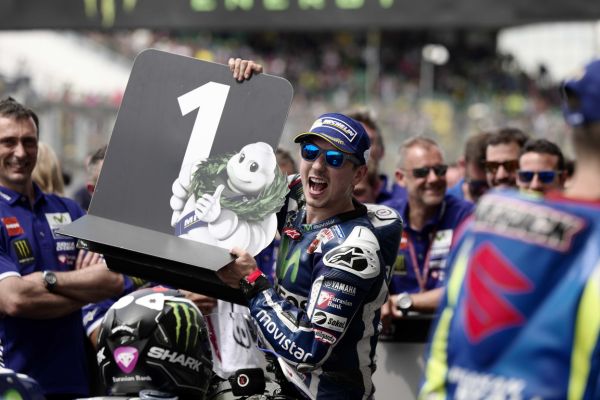 Jorge Lorenzo won a spectacular Italian Grand Prix from Marc Marquez by just 0.019 seconds, out dragging the Honda across the line on the final lap.

Lorenzo led every lap, despite losing the lead for half a lap on the final lap, the World Champion still managed to out drag Marquez over the finish line – something that will frustrate Marquez immensely, who has been moaning to Honda about his RC213V getting out the corner.

It was a legendary last lap with Marquez eventually squeezing past Lorenzo at Mattarazzi, and continuing to lead right until the Biondetti chicane where Lorenzo took the lead back, albeit for one corner with Marquez snapping right back.

Marquez appeared to have the World Champion covered, and it was then a straight drag to the line, a drag in which Lorenzo remarkably won, to claim his fifth win in the last six years at Mugello.

The battle for the lead could’ve been a three way battle, had Valentino Rossi not been robbed of the chance to compete by a engine blow up. There were warnings for Yamaha after Lorenzo lost an engine to a blow up in the morning warm up, however nobody could’ve predicted Rossi would have suffered the same fate in the race. At the time of retirement, Rossi was in second place, right behind Lorenzo.

Iannone salvaged a podium finish, posting the fastest lap of the race in the final lap as he recovered from his awful start to pip Dani Pedrosa to the final podium spot.

Andrea Dovizioso finished fifth position at his home race, battling through a neck injury, whilst Maverick Viñales couldn’t convert his front row start to anything more than sixth position.

Lorenzo’s lead at the head of the World Championship standings is now ten points over Marc Marquez, whilst Rossi’s mechanical issue leaves him 37 points behind Lorenzo through six rounds.