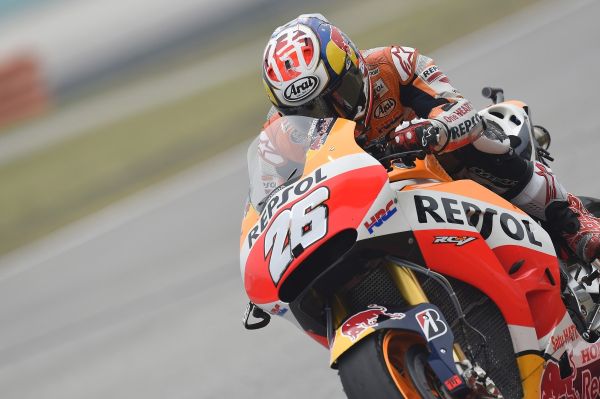 In a staggering press release the title sponsor of the Honda Factory MotoGP team, Repsol, called their participation in the sport into question, following the actions of Valentino Rossi in Sepang.

The petroleum giant has issues a statement out of anger, as they believe that the Italian should’ve been dealt a bigger punishment after the “unacceptable and unsportsmanlike conduct” displayed by Rossi in Malaysia.

“Dani Pedrosa achieved a great victory today in the Malaysian Grand Prix –a win that was unfortunately overshadowed by the unacceptable and unsportsmanlike conduct of Valentino Rossi against Repsol Honda Team rider, Marc Marquez. On the seventh lap of the race, with Marquez and Rossi immersed in a battle for third place that involved several overtaking moves between the two, the Italian –in an absolutely intentional action – dealt an unsportsmanlike kick to the Repsol Honda rider that knocked him to the ground.

“Although Marquez was fortunately able to escape unharmed from the attack, for Repsol the conduct of Rossi is absolutely unacceptable because it endangered –in a premeditated and unsportsmanlike manner– the safety of the Repsol Honda team rider. Repsol consider this an unsportsmanlike act incompatible with the values of sport and competition.

“Repsol are deeply saddened that situations like that which occurred today in Sepang exist, especially as the company feel proud of sporting values: Companionship, competitive spirit and commitment from riders. Without these values, it would not make sense for Repsol to participate in the sport as a sponsor.

“Repsol also call for a clear and strong regulation in the interest of the safety and physical integrity of the riders, which punishes behaviour like that seen today clearly and decisively.”

Should Repsol walk away from the sport, it would be an massive blow to the entire sport. Repsol don’t just sponsor the Honda factory team. They also have many links to many teams right down to the Spanish Championship level.