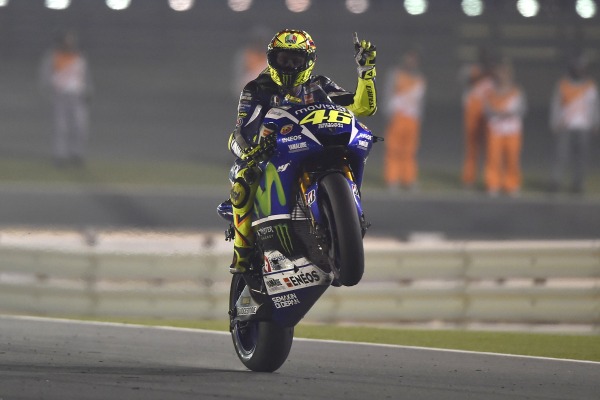 Valentino Rossi claimed an historic victory on one of the best MotoGP races of recent times during the season opener in Qatar.

The 36-year-old Italian rolled back the years with a display reminiscent of his former years on his YZR-M1 to hold off the advances of a resurgent GP15 in the hands of Andrea Dovizioso. The victory starts Rossi’s hunt for a tenth world title off in the perfect way, especially with the fact reigning MotoGP World Champion Marc Marquez ended in fifth position after a mistake in the first corner.

Rossi was looking forward rather than behind, after going one better than he has managed the last two years in Losail.

“In the last three seasons I always rode solid races and arrived on the podium but to come back with a victory is another thing,” said the Italian.

“I am so happy because we suffered a lot during the practices and also the tests, but we worked very well for the 22 laps race and I was very strong.

“First of all you have to be lucky, but especially the work that we do with the team during the weekend makes the difference for my pace in the race. It was definitely one of the best races of my career, considering where we were yesterday.

“I really have to thank all my team, my engineers and all at Yamaha because I think today we did something amazing.”

Rossi said he saw Marquez go wide in the first corner, with the Doctor suggesting he knew just how wide Marquez went, by saying he knew he then had a chance of victory.

“Also at the first corner I saw Marquez go wide and I knew it was a special moment because it was a good chance to win. After a difficult moment when I was behind Andrea [Iannone] and I wasn’t able to overtake, I saw on the board that Marquez arrive,” he added.

“I tried to concentrate and I tried to pass Andrea and from that moment my bike was very balanced for the end; lap after lap I saw Jorge and also Dovi were more in trouble than me.

“In that moment I thought about the way to do the strategy; I never made a mistake and also there were places on the race track where I was very strong and I tried to push.”

The outright pace of the Ducati on the straight raised the prospect that Rossi would be outgunned on the dash to the line but he pulled enough of an advantage to hold the edge on a sizzling last lap.

“Yes [thought Ducati would come past on run to line] but I knew that if I was able to overtake Andrea soon, I could make a small advantage because in the last part, section three, section four – except the last corner – I was very strong,” Rossi said.

“In the last corner, I did not hear the noise of the Ducati, I exited very well and I could enjoy the moment before the line.

“I feel good, I have good motivation and I like my job because it is also my passion, like all the guys here. For me, if you live a good life, good training, you can ride at the top until 40-years-old. What makes the difference is more the motivation and the concentration,” he added.

“So I am so happy because Marc is behind, which is very important for the championship, but this year I think there will be six instead of four, because the two Ducatis are very strong and they are riding in a good way, so it will be very interesting.”