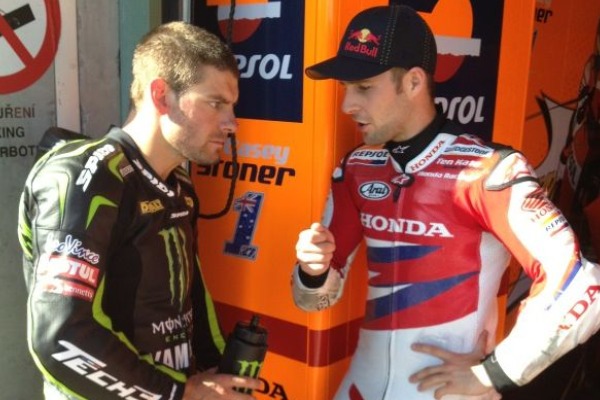 LCR Honda new boy Cal Crutchlow has said that if he had a choice over his team-mate for 2015, he would like it to be Pata Honda rider, and close friend Jonathan Rea.

LCR have been linked with a production RCV1000R bike for 2015, finally expanding into a two effort rider. Jack Miller had been widely expected to ride for LCR, initially in the prototype seat, and then in the production seat once Crutchlow’s deal had become public. However earlier in the week LCR admitted to Spanish television that Johnny Rea and Eugene Laverty are also both on the radar for the potential second seat.

With Crutchlow confirmed in the LCR team for next season, he was asked if he had any preference as to whom he may be sharing a garage with next season. “If I have a preference, I’ll have Johnny Rea,” Crutchlow told crash.net.

When asked why Rea, the Englishman said: “I think he’s done a lot better than a lot of people would have done in his position, on his bike, for so many years. I don’t believe he’s had the best package in World Superbike for years and I believe he’s a good rider. “But I don’t know who it will be. I don’t even know if I’m having a team-mate and that’s the truth. I’ve heard the same rumours as everyone else, but I’ve also been told at the moment that [the team] don’t know yet either.”

Rea has a good relationship with Honda, dating back to 2005 when he rode a fireblade in the British Superbike series. He has been riding for Honda in the Ten Karte World Superbike squad since 2009, and stood in for Casey Stoner in the Repsol Honda MotoGP team in 2012 for two races whilst the Australian was injured with a broken ankle.

In spite of what Oscar Haro told Movistar, Rea took to twitter to reveal that he has had no contact over a potential ride in 2015. Whether this is because LCR are waiting for their second bike to be confirmed from Honda, or if it is just Rea outing LCR over playing the contract ‘game’, Rea will undoubtedly remain hot property after continuing to out perform his slower Fireblade in World Superbikes.