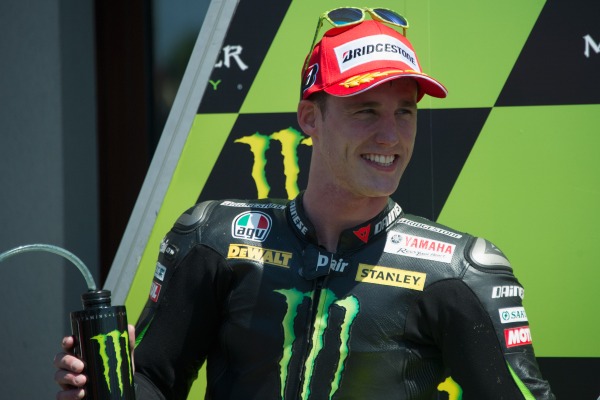 Despite Marc Marquez winning the opening eight races this season, rookie Pol Espargaro insists that the reigning World Champion is not invincible.

Espargaro was Marquez’ main title challenger in 2012 the year Marquez won the Moto2 title, and a year later Espargaro managed to take the Moto2 title before moving into MotoGP. Marquez and Espargaro’s rivarly goes back to their 125 days when Espargaro was with Terol in taking the fight to Marquez in 2010, the year Marquez won his first World Championship. The pair’s rivalry was at its most intense during the Catalan Moto2 Grand Prix in 2012 when a hard move from Marquez saw Espargaro go flying off his bike on the final lap. Whilst the rivalry has simmered in recent years, the pair are not the best of friends.

Espargaro has enjoyed a successful start to his MotoGP career, qualifying on the front row in Le Mans and backing that up with a fourth place finish. Despite not yet reaching the heights of Marquez, Espargaro is happy with the way he has started his MotoGP career.

Speaking to Spanish website motocuatro, Espargaro said he has set achievable and realistic targets for this, his rookie year. “My dream is to become MotoGP world champion, but this year, it’s to finish in the top five every race,” said Espargaro. “My job is to one day win the MotoGP World Championship. For this, I am fighting with all my strength. This year I was promoted to the premier class and I’m feeling better everyday.”

The 2013 Moto2 World Champion then went on to talk about Marquez, and whilst he admitted he has done a fantastic job since moving up, he has said that he is beatable.

“His riding is spectacular and he’s a very complete rider. He has a great talent, dedication and experience. He is currently at the peak of his career, but no one is unbeatable. But he works hard and deserves everything he gets. He can break all previous records. For Lorenzo and Pedrosa, Marquez is difficult to catch. Even if they can follow him, he just does not show any weakness.”

With regards to his own future, it has become clear that should both Rossi and Lorenzo sign a new contract with the Factory Yamaha team, then Espargaro would be free to talk to, and potentially move teams a year into his two year contract should he desire. Obviously with Rossi already signing a new deal, it now very much hinges on Jorge Lorenzo. But even if the two time MotoGP World Champion does decide to stay with Yamaha, Espargaro has admitted it is unlikely he will look to move elsewhere.

“If the two official bikes are taken I am able to speak with other teams and I am able to move. I have offers but we don’t know what to do, though my priority is to stay because I like this team (Tech3) and bike and I am competitive,” Espargaro told MCN.

“Tech3 is one of the best in the world championship and there are not many like this one. We have to be smart and not stupid but if the two official bikes are taken I have to think I am still on a good bike in a good team and there is no meaning to change just because I’m not on the official bike.”