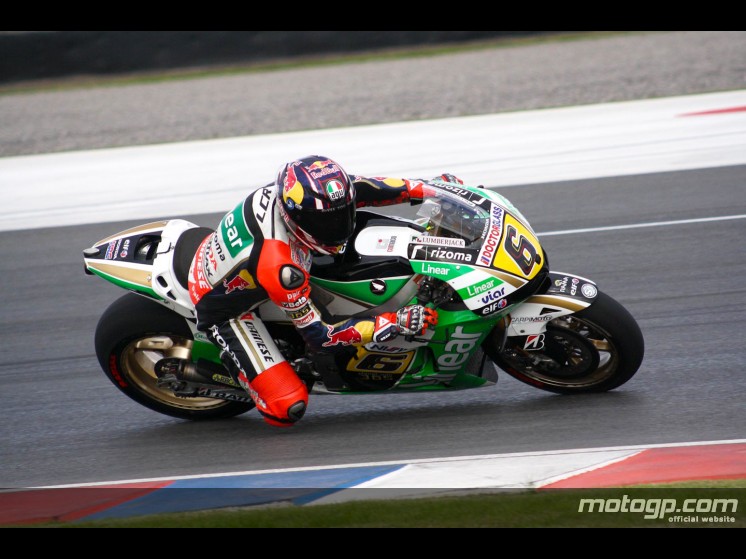 Stefan Bradl was the fastest rider on the first outing of MotoGP machines at the new Termas de Rio Hondo circuit in Argentina.

The German was the fastest man on the first day of the five riders who made the long trip to Argentina.

The test is being used as an opportunity to gather data for the race, get an idea of bike set-up, and est tyre suitability. Bridgestone expects the circuit to be the harshest event of the year on tyres, and has brought a variety of symmetric and asymmetric slicks to test.

However it was Bradl who was the fastest man today on his LCR Honda with a time just over the 1.44 mark, 13 seconds quicker than the early lap times.

GO&FUN Honda Gresini’s Alvaro Bautista put in a late lap to end the session in  second place, just ahead of Yamaha Tech 3’s Cal Crutchlow. Avintia Blusens’ Hector Barbera, who is the only CRT rider who made the trip on his FTR Kawasaki, was fourth position.

It wasn’t just the MotoGP riders who were in action in Argentina, Rabat and Terol were also there representing the Moto2 class, and it was Tuenti HP 40’s Tito Rabat who headed the first day on his Kalex machine , posting a lap in the mid 1.48s.

Nico Terol, aboard his Mapfre Aspar Team Moto2 Suter, lapped just over 1.5s slower of his compatriot, but he will be hoping to improve tomorrow if the weather stays fair.

The general consensus from riders after day one was positive, saying that they enjoyed the fast layout of the circuit and that the reception they got at the track was exceptional. However with the track being quite fresh however, they sighted that grip levels were still low, as to be expected, and the fast nature of the circuit was causing problems for the tyres.

Testing will resume tomorrow morning at 10am local time.