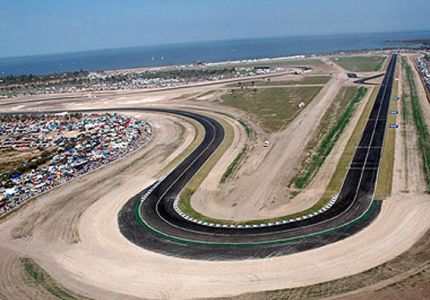 Dorna will be hosting a private test in Argentina this July this year, after the Assen (29th June) round of the championship for a private MotoGP test.

The Termas de Rio Hondo circuit was due to host the second round of the MotoGP season, but political issues surrounding Repsol and the argentine government put an end to that, but the 2014 round has already been confirmed.

Despite rumours that all of the MotoGP and CRT teams will be invited to the test other than the riders who took part in the COTA test earlier this year have been rubbished, with the whole grid invited and expected to test in Argentina.

Despite the five day trip, only two days will be testing days, and the others will include PR activities in the countries capital of  Buenos Aires.

The decision from Dorna has come in for critizsm in some quaters for the timing of the trip. The MotoGP paddock will leave the Netherlands swiftly, before their 5 days in Argentina, then fly back to Europe for the German round at the Sachsenring (14th July) before making a third trip across the Atlantic in July for the US round at Laguna Seca ahead of the summer break.