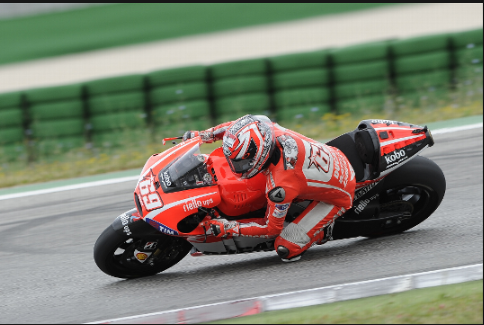 On the back of a disastrous weekend in Assen, Factory Ducati riders Andrea Dovizioso and Nicky Hayden spent two days at Misano testing the GP13 lab bike and more updates in the hope to fix the Desmosedici.

The factory duo were joined by Pramac’s Andrea Iannone, and Alex De Angelis who will be standing in for Ben Spies during the USA Grand Prix at Laguna Seca at the end of the month.

Dovizioso was testing an updated frame, the new frame that Dovi was testing was slightly different than the one he tested during the Jerez and Mugello tests. The feedback from Dovi was that the new frame helps him in corner entry under braking, although there is still understeer when he opens the throttle.

Dovizioso is hoping to use the new frame at next weekends German Grand Prix at the Sachsenring, although there is only one frame available.

Dovi completed 105 laps over the two days at Misano, and the Italian said: “The Misano track is a bit inconsistent for our bike, but coming from Assen, we immediately felt a bit better at this circuit.

“We worked on the current bike, finding a setup for the Misano race, and then we went ahead with the development of the laboratory bike, trying some new stuff and finding some interesting things. We were able to do nearly two full days of good work, and today we tried a change with the frame.

“There were some positives, like an improvement with the feeling on corner entry. We must decide what to do; it’s a new part, so we have to understand whether or not we can have it in time for the Sachsenring.”

Nicky Hayden was also a busy man in San Marino, as the Kentucky Kid completed a mammoth 158 laps over the two days. The American was busy working on electronics and managed to lap quicker than he did last year during the race weekend in Misano, although last year he was carrying a hand injury.

“It’s certainly been a useful couple of days. We didn’t make any drastic improvements, but I tried something with a different anti-wheelie solution that worked quite well, and I’m happy about that for the next two tracks, which are maybe the worst two circuits for wheelies on the whole calendar,” said the Kentucky Kid.

“We lost a bit of time today with the rain, but in the end I did a low 1:34. That’s not a bad lap time, although we’ll certainly have to do better than that when we come here for the race. We did a lot of laps, mainly with the wheelie control and a different fork setting, and we got some good information,” said Hayden.

Pramac’s Andrea Iannone only managed 40 laps on the ‘lab’ version of the Desmosedici GP13, and posted a best lap of a 1:35.1 (around 1.2 seconds off Lorenzo’s best race time last year) whilst working on his race pace. The Italian was so impressed with the ‘laboratory’ bike that he hopes to switch to it for the upcoming German round.

The final man was Alex De Angelis, who was making his Ducati MotoGP debut. The Forward Racing Moto2 rider did just ten laps yesterday to get used to the Pramac GP13, then today he managed another 50 laps.

De Angelis was almost 2 seconds slower than Hayden and Iannone’s lap times, and posted an unofficial lap time of 1.37.0.

Despite not being a MotoGP rookie, de Angelis said he has just started to understand the bike, but didn’t go very quick because he only did 50 laps today and about ten yesterday, but he did admit that he had fun riding it, and the test was basically to allow him arrive at Laguna Seca some experience on the Ducati, and also regain confidence with the Bridgestone tires and carbon brakes.

“I had so much fun, it was super positive,” said the Sammarinese.

“MotoGP bikes are very powerful. I’m very happy with my day because in each outing we improved the lap time. This, besides having fun, was the objective and I would say that we have achieved that. I take this opportunity to thank Ducati, the Ignite Pramac Racing Team and NGM Mobile Forward Racing for giving me the opportunity to get this wealth of experience.”