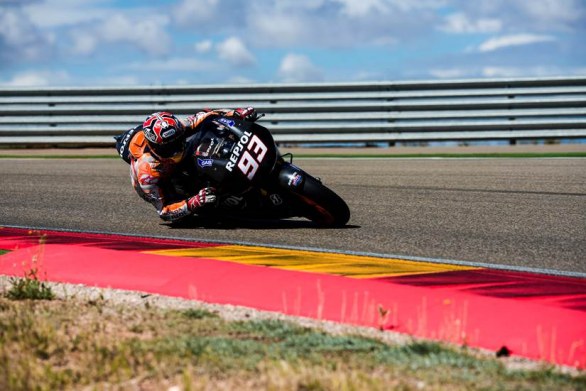 The testing week in northern Spain has concluded with Marc Marquez and Randy de Puniet the only two riders to get out at Motorland Aragon toady.

With Dani Pedrosa and Stefan Bradl already having their debuts on the 2014 Honda RC213V yesterday, today it was the turn of the rookie.

Despite having the 2014 edition on offer and ready to use for Assen if desired, the rookie has decided at the moment the 2013 bike is still the better one, as did Pedrosa.

“It’s been a positive test here in Aragon – which is one of my favourite circuits,” said the Spaniard.

“I have learned quite a lot in these two days, in the beginning I struggled a lot in the long corners but together with my team we have progressed and today I was able to ride well, with a good rhythm. I’ve tested many things and every exit we had a different setting!

“Now I understand the bike a lot more than at the start of the season and after a few laps I am now able to understand if we have a good setting or not. Yesterday I concentrated on the coming GP’s and tuning the bike in preparation. Then today I tested new parts, some items with Öhlins and also a new tyre from Bridgestone.

“I was also able to complete 13 laps on the 2014 prototype machine. The first feeling was quite good and the engine as some improvement. With the chassis, there is also an improvement but also some areas to work on but we didn’t do any setup work on the bike. Anyway, this is a very good base for the HRC engineers to work from but at the moment I prefer our current 2013 machine.”

The only other man in action today was Randy De Puniet on his Suzuki. After sobering times yesterday  there was much more for the Frenchman to write home about today, as he ended the day just 1.5 seconds from Lorenzo’s fastest lap of yesterday. In doing so, De Puniet also managed to knock off a huge 1.3 seconds from his Wednesday time, in a much more encouraging test for Suzuki.

Suzuki will now return to Japan for further testing, before returning to Europe for more tests in Misano and Mugello with Ducati.