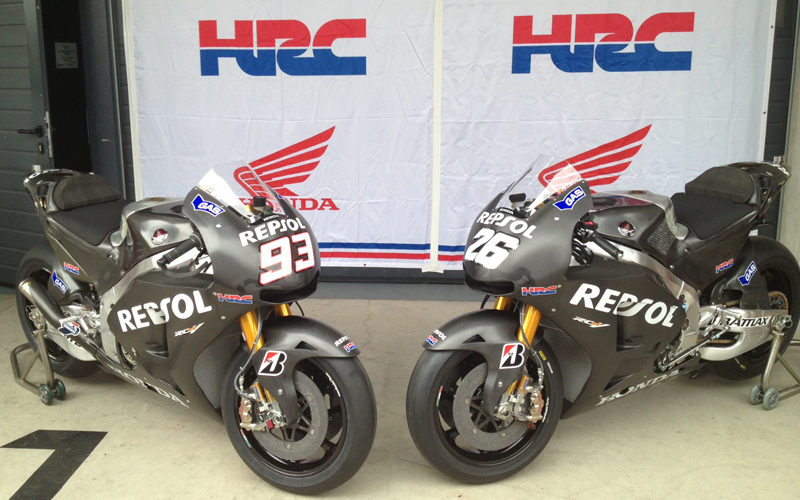 Honda today revealed the 2014 Honda RC213V for the first time in Aragon on a test day that was marred by bad weather in northern Spain.

Despite neither rider being able to get onto track due to the inclement weather, there was enough going on off track to keep people busy with the world being shown the new RC213V’s.

HRC decided to skip the test day in Barcelona yesterday in order to get ready today to test the new bike, but that hasn’t worked with the weather being against them.

This isn’t the first time that Honda have bought a release of a bike forward for riders to test. Last year, they brought in the 2013 bike to the Mugello round in an effort to cure the chattering issues Pedrosa and Stoner was facing due to new tyre regulations.

Pedrosa liked the bike so much, that he elected to have it from the next race in Laguna Seca till the end of the season, in a move which saw him record the longest win streak of his MotoGP career and nearly pip Jorge Lorenzo to the title.

Project leader Takeo Yokoyama, has said that should either Dani or Marc prefer the new bike, it will be available to them in Assen despite only two currently made, and the race being in just nine days time. Yokoyama also said that should the weather not improve tomorrow then Honda will revise plans stay on a third day.

Yamaha and Suzuki arrived at Motorland Aragon this evening and will hope to be on track with Pedrosa and Marquez tomorrow.