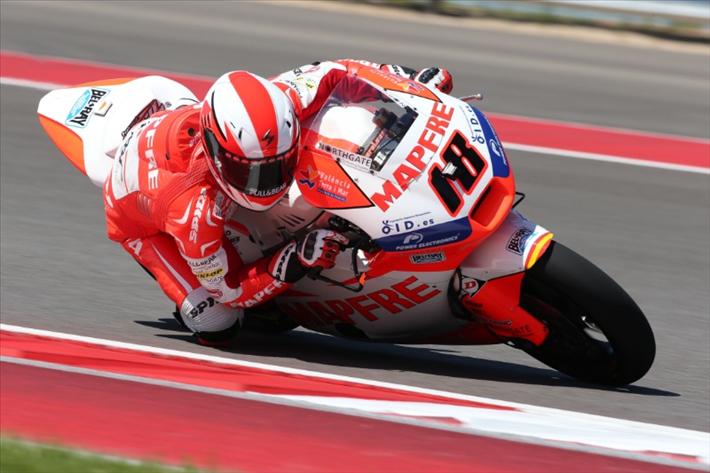 Jorge Martinez Aspar is believed to be considering running Yamaha M1 engines inside Suter chassis’ in MotoGP in 2014.

The Spanish team that currently heads the CRT standings aboard Aprilia-ART machines, but the legendary team owner is thought to be looking at the option of taking advantage of using some of the lease Yamaha engines with the Claiming Rule being abolished at the end of 2013.

“I think that the Yamaha engines are technically closer to the factory built ones than those of the Honda,” Martinez was quoted as saying in Catalunya.

If Aspar does elect for Yamaha engines next season, he would then be faced with a decision about what chassis to house the M1 engines in. The Aspar Moto3 team runs Kalex-KTM’s, but the Moto2 team uses Suter MMX2 chassis.

Despite being faced with a decision, it is understood that Aspar would elect for the Suter chassis should he change his engine, due to previous experience.

Kalex have no experince in the MotoGP class, where Suter have been involved in the top class of motorcycle racing since 1999. Suter are also currently being used in MotoGP by the IodaRacing Project.

Martinez is under the assumption that with the Claiming Rule becoming no more, the Aprilia development budget will dry up as the Italian brand aren’t an official factory in MotoGP.

An ART bike costs approximately the same as what it will cost for a production Honda RC. The Yamaha engine is cheaper, around €300,000 cheaper per year, although you only get the engine, not a complete bike like you do with the ART or the RC.

The Yamaha engine is only leased rather than bought like the ART or the RC is, but Aspar doesn’t see this being a problem. “The fact that I have to return it a leased Yamaha engine is not a disadvantage,” explained Martinez. “I have not sold the 2012 ART’s yet.”

Suter have confirmed that there has been contact with Aspar over building a frame for next season.

“We are in negotiations with Martinez for the MotoGP class, but I do not know if a deal is concluded,” said Eskil Suter, CEO of Suter Racing Technology in an interview with German website speedweek.com.

Eskil Suter also said that Suter would only require around four months to build a chassis suitable to hold an M1 engine, two months shorter than what Kalex have quoted as a time frame for building an engine.