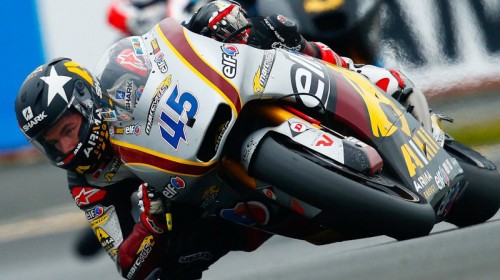 Scott Redding has taken his first Moto2 win in a rain shortened race at Le Mans and taken a commanding 24 point lead in the process.

The 20 year old’s victory, was the first by any English rider in the intermediate class of Grand Prix racing since Alan Carter’s win in Le Mans exactly 30 years ago, and was the next step in what is shaping up to become a season to remember for the Gloucestershire rider.

Redding seemed to be caught up by a short red light at the start, and initially lost ground, but along with teammate Mika Kallio, he quickly fought his way back into the top five, aided by synchronised crashes by HP Tuenti Pons duo Tito Rabat and Pol Espargaro.

The Marc VDS riders eventually forced their way to the front of the field once Taka Nakagami crashed out at museum corner, leaving Redding to take the lead, and Kallio squeezing past Xavier Simeon into second place.

The race was then red flagged, counting back a lap, meaning we were left with a Marc VDS 1-2.

“It’s an amazing feeling to have taken the win today, in what were very difficult conditions,” said Redding.

“It’s a fitting reward for the team, who have all worked so hard for this win and, to them, I have to say a big thank you. I also owe a lot to Marc van der Straten for his support, so it was great that we had the chance to stand together on the top step of the podium today.

“The win also puts me back on the top of the championship standings, but this time with a bit more of an advantage, so I’m happy with that. Now we go to Mugello, where I’ll definitely be looking for more of the same!”