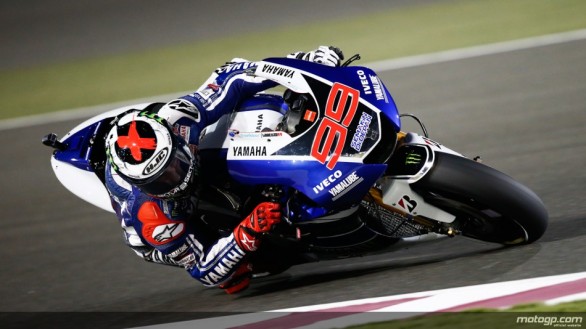 Reigning World Champion Jorge Lorenzo was the fastest rider during the first session of MotoGP test in Qatar leading Briton Cal Cruthlow and team mate Valentino Rossi under the flood lights in Qatar.

The first free practice session of the new season at the Losail International Circuit in under the floodlights in Qatar saw Yamaha domination with the satellite of Crutchlow sandwiched between the two factory riders ahead of a group of RC213V Hondas.

The reigning World Champion Jorge Lorenzo was the fastest rider in the first session as he went on a late run to get to the top of the timing screens after Crutchlow sat on the top of the screens. In his trademark methodical approach the Mallorcan posted a lap time of  1:56.685.

Briton Cal Crutchlow on the Monster Tech3 satellite Yamaha was second position, and let the session for quite a while, and when he was eventually toppled it was only by 0.058s.

The returning Valentino Rossi was on the top for most of the session, and looked destined to be set for a fairytale return on his competitive return to Yamaha, although after late fast laps he was relegated to third position, although he was still only 0.071 off his team mates session best time, and making it a Yamaha theoretical podium and meaning the top three were separated by less than a tenth.

Marc Marquez was the first non Yamaha rider, and was fourth fastest but alarmingly half a second off the pace of compatriot and title rival Jorge Lorenzo. In spite of it only being a Thursday evening (Friday morning in Europe) it will still be a tad alarming for HRC to see them so far of the pace already.

Surprise of the session was undoubtedly Ducati’s Andrea Dovizioso, who ended the first session in fifth position. The Italian was just 0.853 seconds back of Lorenzo’s time, and continues to reduced the gap from the first Sepang test which saw that gap around the 1.5 second mark, which can only encourage Ducati.

Sixth and seventh positions belonged to Honda satellite riders Alvaro Bautista and Stefan Bradl respectively. The Honda duo were both within a second of Lorenzo’s fastest time, and both found themselves ahead of Factory Honda rider Dani Pedrosa.

Pedrosa was the eighth fastest rider, and went back to his trademark Pedrosa ways, where he would build up through a weekend, on a very safe first session, although nobody would be surprised to hear of problems on his bike. Pedrosa was just over a second behind Lorenzo although he is far too experienced to know nothing can be one on the first free practice of the season.

Aleix Espargaro continued his fantastic run aboard the ART Aspar CRT machine, up in amongst the prototypes he found himself above a cluster of Ducati’s and just 0.094 seconds behind Pedrosa.

PBM ART rider Yonny Hernandez took a tumble, although the Columbian remained unharmed, and he was the only victim of the blustery, sandy track.