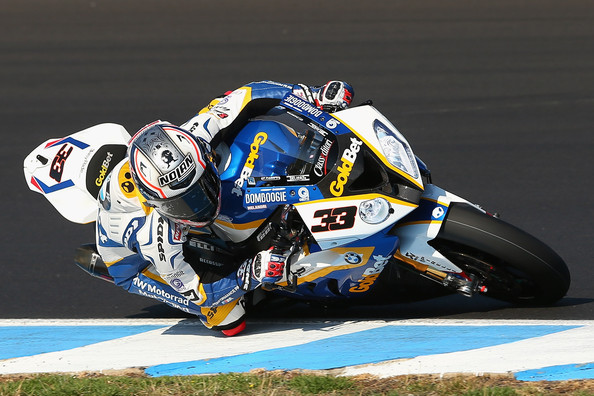 Alstare Ducati duo Carlos Checa and Ayrton Badovini had a weekend to forget during the first round of the World Superbike season at Phillip Island with both of them ending up in Melbourne’s hospital.

Carlos Checa despite a big pre season crash, was on pole position for the season opener, and looking good until midway through race one he was involvd in a crash, concussing himself and meaning he couldn’t take part in race two.

Once the 2011 WSBK champion returned home to Spain, he underwent a further test which revealed that he had suffered two cracked bones and a ligament injury to his right foot.

Despite these injuries, the Spaniard believes that he will be fit for next month’s  home round at Aragon.

“After the crash in the first race in Australia, I’ve sustained two cracks and a ligament injury. It’s nothing serious but I have to be immobilized for two more weeks.

“Regarding the crash I don’t remember anything before it happened. I had some problems with the rear tire and after a good start, I was riding cautiously, but I missed my braking mark because of a severe pain in my foot.

“Nevertheless I’m calm because I’ll be in shape for the Aragon round and am eager to continue working on the new Ducati Panigale.”

Meanwhile his team mate Ayrton Badovini missed both races down under after crashing in practice and breaking his foot Badovini. Despite his best efforts to get out there, after a practice session on the Friday it was evident that the Italian wasn’t fit.

“I had the plaster cast removed and I’m about go to Imola to visit the guys at Clinica Mobile, start the passive rehab and to discover the reason why I feel pain in my left knee,” said Badovini.

“It is probably caused by putting all my weight on that leg while getting around on crutches. They said I will be able to race at Aragon, now it’s a matter of understanding the exact day I will be OK.

“Up until now I haven’t done much training due to the broken rib – that has been the most painful injury – but in the last two days I felt better so I could start working on the upper body, and today we’re going to make a plan for it.

“It’s important not to forge ahead right now based on how I feel, because we can end up making things worse instead of improving my conditions. There’s still a month to go and that makes me feel good.

“The hard work goes on both at Ducati and at the Alstare headquarter. I’m confident we’ll be back strong at Aragon and there are also some testing days planned after the event, so I can say our season will officially start in Spain.”

Another man in a race to be fit for the second round of the season at Aragon is Marco Melandri.

And just yesterday the BMW Motorrad Goldbet rider took to twitter to give everybody an update on his shoulder and his rehab.

Finally stitches are off and doctor said i can force moviment and work on resistence… So happy!! Gogogo!!!